LSU is committed to using its extensive resources to solve economic, environmental and social challenges. The university strives to promote civic engagement, increase cultural competency, challenge historic sentiment, and develop new strategies to accommodate the changing demographics of our community.

The Baton Rouge Area Violence Elimination, or BRAVE, program is a unique partnership between researchers, law enforcement officials, and city government created to reduce and eliminate violent crime committed by juveniles. The program focuses on the area within the 70805 zip code, which alone comprises 13.5% of the Baton Rouge population and is accountable for 30% of the city’s homicides. LSU researchers have been assisting law enforcement to identify primary offenders and their affiliation with specific groups and gangs, analyzing the geographic patterns of violent crime committed by these offenders through GIS mapping, and evaluating the outcomes of individual offender intervention.

Louisiana is in the midst of its largest economic expansion with $60-$80 billion in projects, and is reliant on higher education to produce more than 22,600 new completers to address immediate, short-term workforce gaps. Industry is expecting Louisiana colleges and universities to deliver 80,000 skilled and educated employees at a rate of 14,000 new graduates per year for the next six years.

As part of the WISE Act, LSU began strategically investing in areas that serve as the foundation to build Louisiana’s current and future economy such as Energy, Coast, Computation, Biotechnology, Medical, and other four- or five-star job-related fields as defined by the Louisiana Workforce Commission.

In the spring of 2014, the LSU Speech, Language, Hearing Clinic introduced a beta version of its pilot program – dubbed the Nana Project – allowing its National Student Speech Language Hearing Association, or NSSLHA, students an opportunity to work with residents at the St. James Retirement Community. 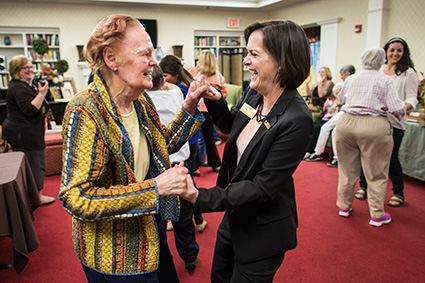