The LSU Campus Mounds, with 1 Construction Beginning at ~11,000 BP, are the Oldest Known Extant Man-Made Structures in the Americas, American Journal of Science 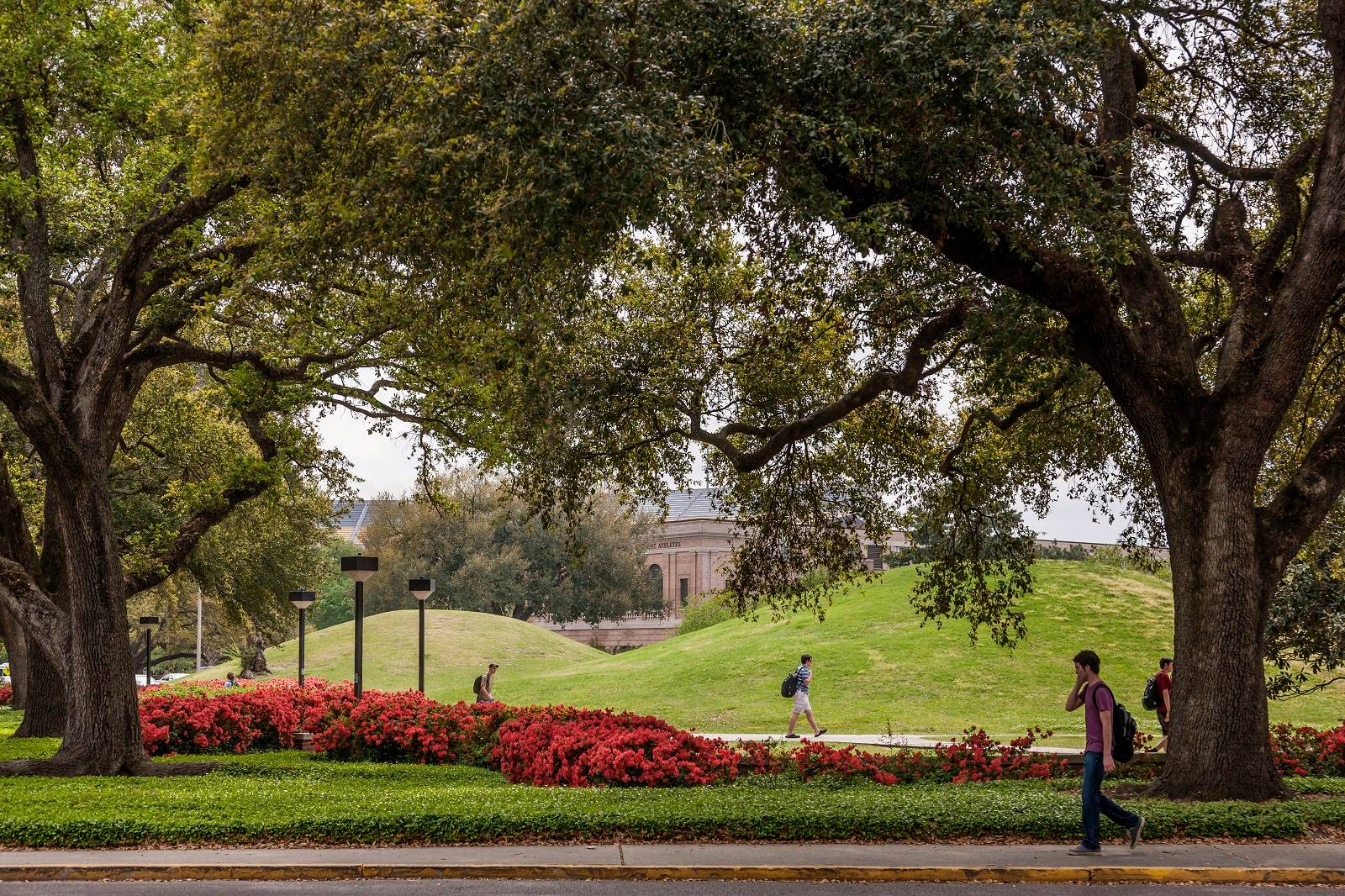 The LSU Campus Mounds pictured here are the oldest known man-made structures in the Americas.

BATON ROUGE – New research reveals more information about the LSU Campus Mounds, including the discovery of thousands of years old charred mammal bone fragments and a coordinated alignment of both mounds toward one of the brightest stars in the night sky. This new information offers more insight into the oldest known man-made structures in the Americas.

The two large, grassy mounds that are about 20 feet tall, on LSU’s campus, are among the more than 800 man-made, hill-like mounds in Louisiana, built by ancient indigenous people. While many mounds in the region have been destroyed, the LSU Campus Mounds have been preserved and are listed on the National Register for Historic Places.

“There’s nothing known that is man-made and this old still in existence today in the Americas, except the mounds.”

This study was published in the American Journal of Science by Yale University.

Ellwood and colleagues collected sediment cores from the two mounds that are located on LSU’s campus along Dalrymple Drive to learn more about them. The cores revealed layers of ash from burned reed and cane plants, as well as the burned mammal bones. Radiocarbon dating of the layers of material indicates the mounds were built over thousands of years. These findings show that people began to build the first mound about 11,000 years ago. The scientists think that sediment for the southern mound, which they’ve named “Mound B,” was taken from a location immediately behind LSU’s Hill Memorial Library, because there is a large depression in the ground there. The mound was built up over a few thousand years, layer by layer, to about half of its current height.

The layers of ash and charred microscopic bone fragments may indicate the mound was used for ceremonial purposes, which included burning reed and cane plants to make large, hot fires that would have been too hot for cooking. The scientists do not know what type of mammals were cremated or why. However, they found many microscopic, charred bone fragments, known as osteons, the building blocks of large mammal bones, in the ash beds in both LSU Campus Mounds.

Then, around 8,200 years ago, the southern Mound B was abandoned. Tree roots found in the 8,200-year-old sediment layer indicate that the mound was not used for about 1,000 years. Also around 8,200 years ago, the northern hemisphere experienced a major climate event with temperatures suddenly dropping on average by about 35 degrees Fahrenheit, which lasted about 160 years.

“We don’t know why they abandoned the mounds around 8,200 years ago, but we do know their environment changed suddenly and dramatically, which may have affected many aspects of their daily life,” Ellwood said.

Then, around 7,500 years ago, the indigenous people began to build a new mound just to the north of the first mound. However, this time, they took mud from the floodplain where the entrance to LSU’s Tiger Stadium is currently located, which at that time was an estuary. With this mud, they built the second mound, “Mound A,” layer by layer, to about half of its current height. Mound A contains mud that is saturated with water, which liquefies when agitated. As a result, Mound A is unstable and degrading, which is why it is critical to stay off the mounds to preserve them.

According to the new analyses of the sediment layers and their ages, it looks like indigenous people cleared the abandoned first-built Mound B and began to build it up to its current height before completing Mound A. Both mounds were completed around 6,000 years ago and are similar in height.

The crests of both mounds are aligned along an azimuth that is about 8.5 degrees east of true north. According to LSU astronomer and study coauthor Geoffrey Clayton, about 6,000 years ago, the red giant star Arcturus would rise about 8.5 degrees east of north in the night sky, which means it would have aligned along the crests of both LSU Campus Mounds. Arcturus is one of the brightest stars that can be seen from Earth.

“The people who constructed the mounds, at about 6,000 years ago, coordinated the structures’ orientation to align with Arcturus, seen in the night sky at that time,” Ellwood said.

Still, there is more to learn and discover about these archaeological treasures on LSU’s campus. Visit the LSU Campus Mounds for more information. 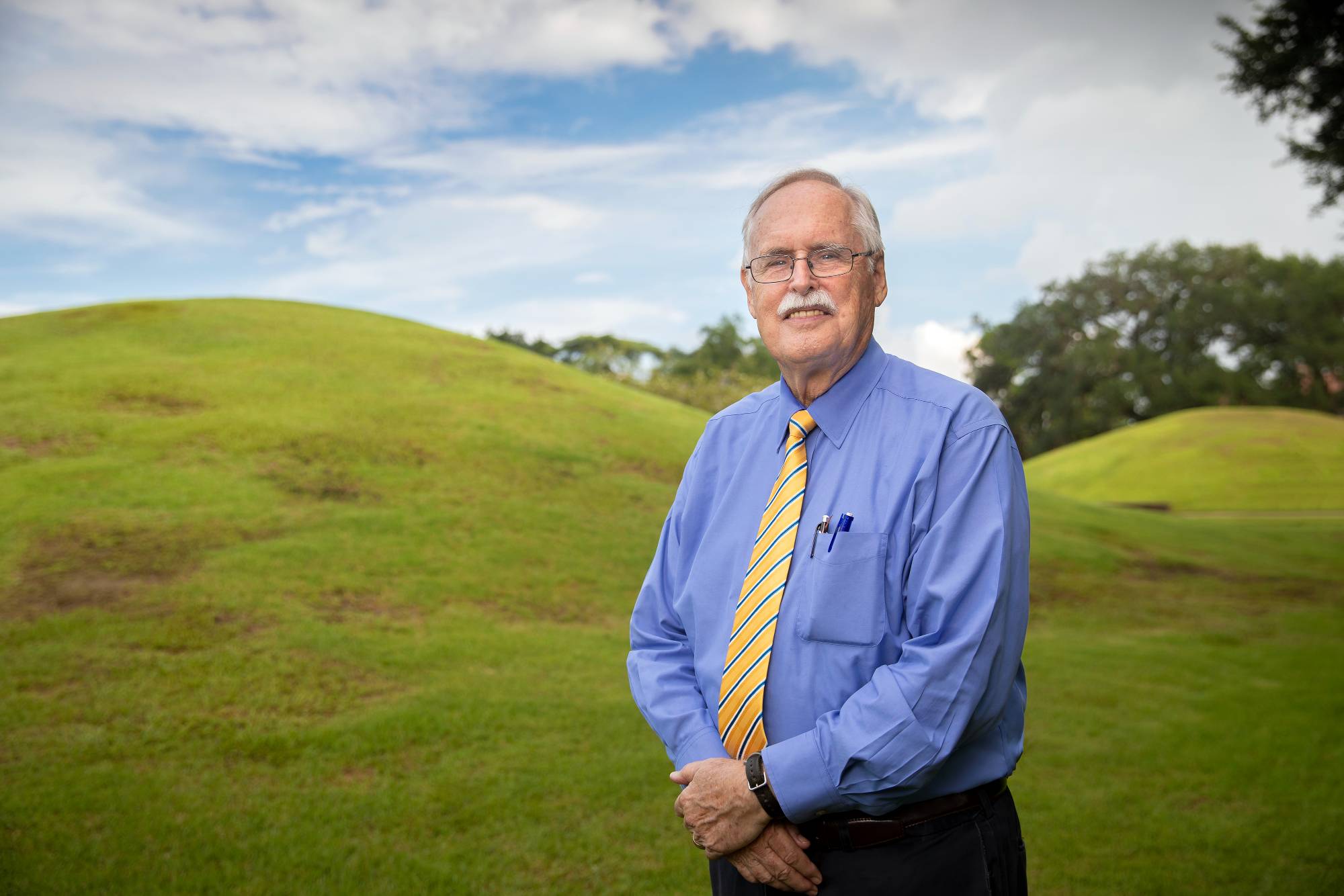 LSU Department of Geology & Geophysics Professor Emeritus Brooks Ellwood led the study that has revealed new information on the LSU Campus Mounds including the discovery of thousands of years old charred mammal bone fragments and a coordinated alignment of both mounds toward one of the brightest stars in the night sky. This new information offers more insight into the oldest known man-made structures in the Americas.

Ellwood will be presenting this research to the public at the LSU Department of Geology & Geophysics Centennial and Endowed Seminar Series on Friday, Aug. 26 from 3:30-4:30 p.m. at Dalton Woods Auditorium in the LSU Energy, Coast & Environment building located at 93 South Quad Drive in Baton Rouge.