LSU biologist develops solutions to reduce plastic in the environment

BATON ROUGE – Five hundred strands of biodegradable Mardi Gras beads— formulated at LSU and made in Louisiana—will be handed out along parade routes in New Orleans this year as concern over the tens of thousands of pounds of discarded plastic beads and their impact on the environment grows. LSU Department of Biological Sciences Professor Naohiro Kato has been concerned about the problem the excess plastic from Mardi Gras poses for the environment for years; and as a biologist, he is creating solutions. 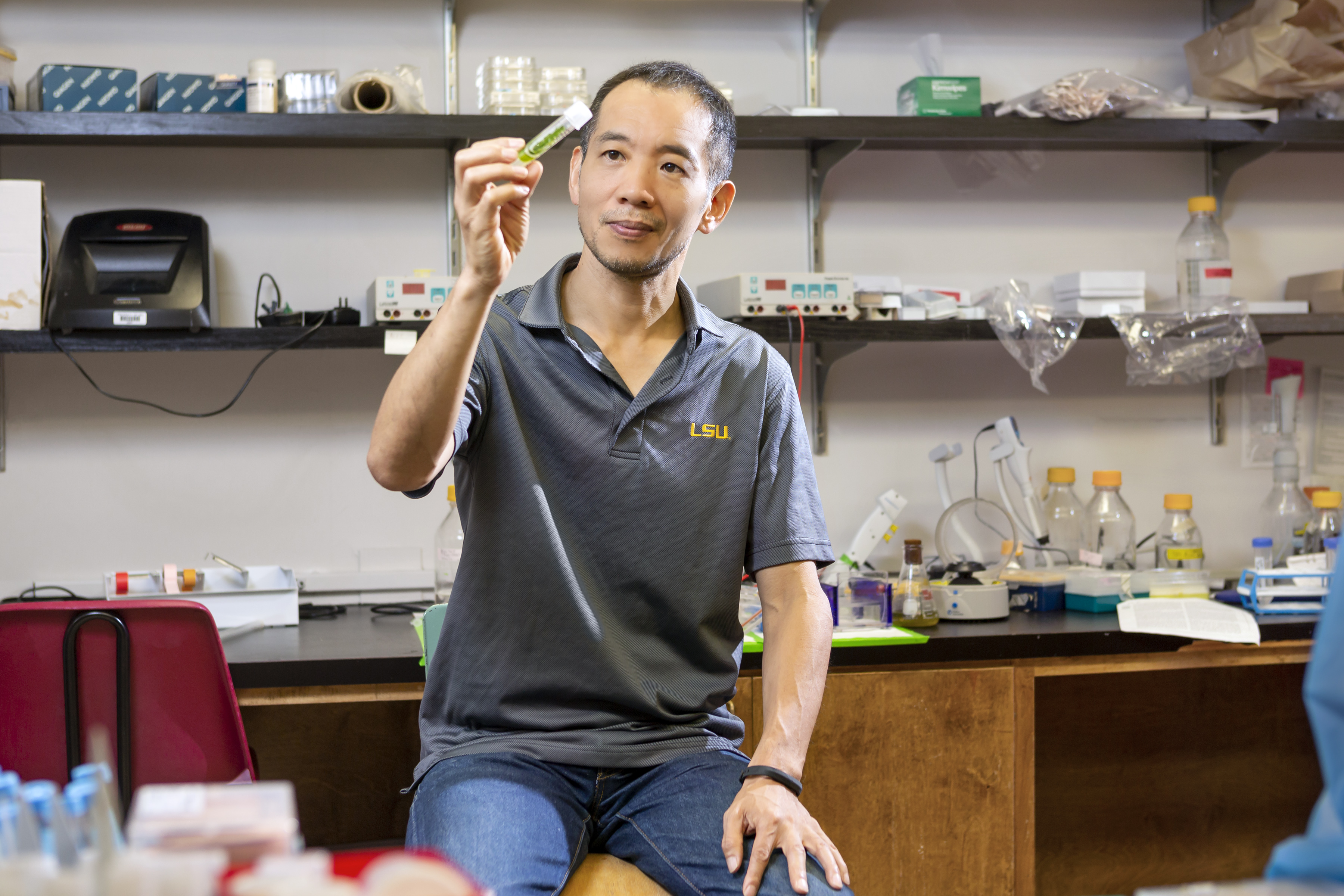 LSU Department of Biological Sciences Professor Naohiro Kato holds a vial of microalgae extract that he and his students grew and processed at LSU. Kato has discovered multiple uses for this microalgae extract including as an antioxidant that is valuable to the nutraceutical industry and biodegradable plastic that can be used to make Mardi Gras beads and other products including marine floats, buoys and fisheries equipment.

“I am a big supporter of more sustainable Mardi Gras celebrations,” Kato said. “We can still celebrate, but we don’t need to throw plastic materials.”

Kato and his LSU students have developed a process to produce biodegradable plastic. He and his students at LSU grow microscopic algae, harvest it and process it into a powder that can be used to create multiple products including biodegradable Mardi Gras beads. After the fun is had, these celebratory throws are expected to biodegrade in soil in about one to two years. The biodegradable beaded necklaces will be thrown in New Orleans by the Krewe of Freret’s float 1 on Feb. 19 and Krewe of Tucks’s float 19 A on Feb. 26.

“Like any new technology, this biobead represents the future. It’s important we help shape the perception that we can do better when it comes to waste and environmental impact, especially surrounding Mardi Gras. Krewe of Freret believes these items can be a luxury specialty throw to begin with, but eventually will be seen as more valuable to parade goers, city sanitation, parks and parkways and others due to their net-zero impact,” said Greg Rhoades, Krewe of Freret co-founder and board member. “The Krewe of Freret is fascinated by the idea that an all-natural biodegradable bead, the most-recognized throw of Mardi Gras, could be invented and produced right here in Louisiana—adding to our sustainability and resiliency.”

Producing the biodegradable Mardi Gras beads that parade goers will catch in New Orleans this month is labor intensive and costly compared to the ubiquitous mass-produced plastic Mardi Gras beads. The biodegradable beads are made from microalgae that Kato and his students grow in a large, 18-foot tank on LSU’s campus in Baton Rouge. They grow and harvest the microalgae three times a month from March to October and bring it back to Kato’s lab to process and dry it. The harvest yields about 120 pounds of dried microalgae each year.

Noble Plastics in Grand Coteau, Louisiana, led by LSU alumna Missy Rogers, produces Kato’s biodegradable Mardi Gras beads, which is a propriety combination of dried microalgae and a bio-based compostable plastic. The beads are formed in a mould and strung on a hemp string. The beads are black and each bead has a protruding letter that together reads: “MADE WITH ALGAE LSU.”

One of the biggest challenges to production is offsetting the high cost to produce biodegradable plastic and therefore a more environmentally sustainable bead. The biodegradable Mardi Gras beaded necklaces costed about $5 per strand, which is about 100 times more expensive than an average plastic Mardi Gras beaded necklace. The cost could be reduced to $0.20 - $0.50 per strand if they are mass-produced. To produce this first 500 strands that will be thrown this Mardi Gras season, Kato received some assistance from the LSU Board of Supervisors’ Leveraging Innovation for Technology Transfer, or LIFT2 grant.

Kato is refining the process to make biodegradable plastic and has patent applications pending on various formulations and methods.

“The most crucial part of the development of this technology is to figure out how to lower the cost of making biodegradable plastic. There’s no way we can compete with the cost of traditional plastics. The most efficient way to compete is to create another revenue and then use the leftover materials to make bioplastic,” he said.

Kato has identified a viable market for the extraction of various compounds found in microalgae that could help offset the cost of producing biodegradable plastic. The nutraceutical industry, which distributes nature-based products for supplements, cosmetics and food, could benefit from the sourcing of these materials from Kato’s microalgae. From the microalgae grown at LSU, Kato has been able to extract an antioxidant called fucoxanthin, which has been shown to have natural anti-cancer properties. Fucoxanthin is a valuable product equating to about a $300 million industry. Kato said he can sell about 1 pound of the powered form of fucoxanthin for roughly $5,000 and is awaiting a contract from a nutraceutical company to produce fucoxanthin for them.

The by-product after extracting fucoxanthin includes other proteins from the microalgae that would be used to make biodegradable plastic that can be shaped into beads and other items.

“We see the value of incorporating biodegradable beads as a significant step in decreasing the use of plastics during carnival and creating a more real-life conversation with carnival riders and parade goers. It’s one thing to talk about it, however, it’s another to actually incorporate it into a float group.”

Kato has been surprised by people’s response and desire to keep what they see as a precious or rare premium Mardi Gras throw.

“My beads are designed to biodegrade,” he said. “If people want to keep them for a long time, they do not need to be biodegradable.”

Therefore, he sees his biodegradable beads as a conversation starter about environmental sustainability and Mardi Gras.

“Maybe biodegradable plastic is not the answer to sustainable Mardi Gras celebrations. Maybe we need to produce more precious items each year that are more memorable and that aren’t thrown away,” he said. “Historically, Mardi Gras beads were made out of glass, handed out and people would keep them because they were very precious and beautiful.”

He sees a need for a cultural shift surrounding Mardi Gras, one in which the celebration doesn’t lead to excessive amounts of mass-produced plastic waste entering the environment.

In addition, he is looking ahead to solve other problems where plastic is polluting the environment. He is exploring ways to create marine floats, buoys and other fisheries equipment using his biodegradable plastic in order to reduce the worldwide problem of plastic pollution in the ocean. 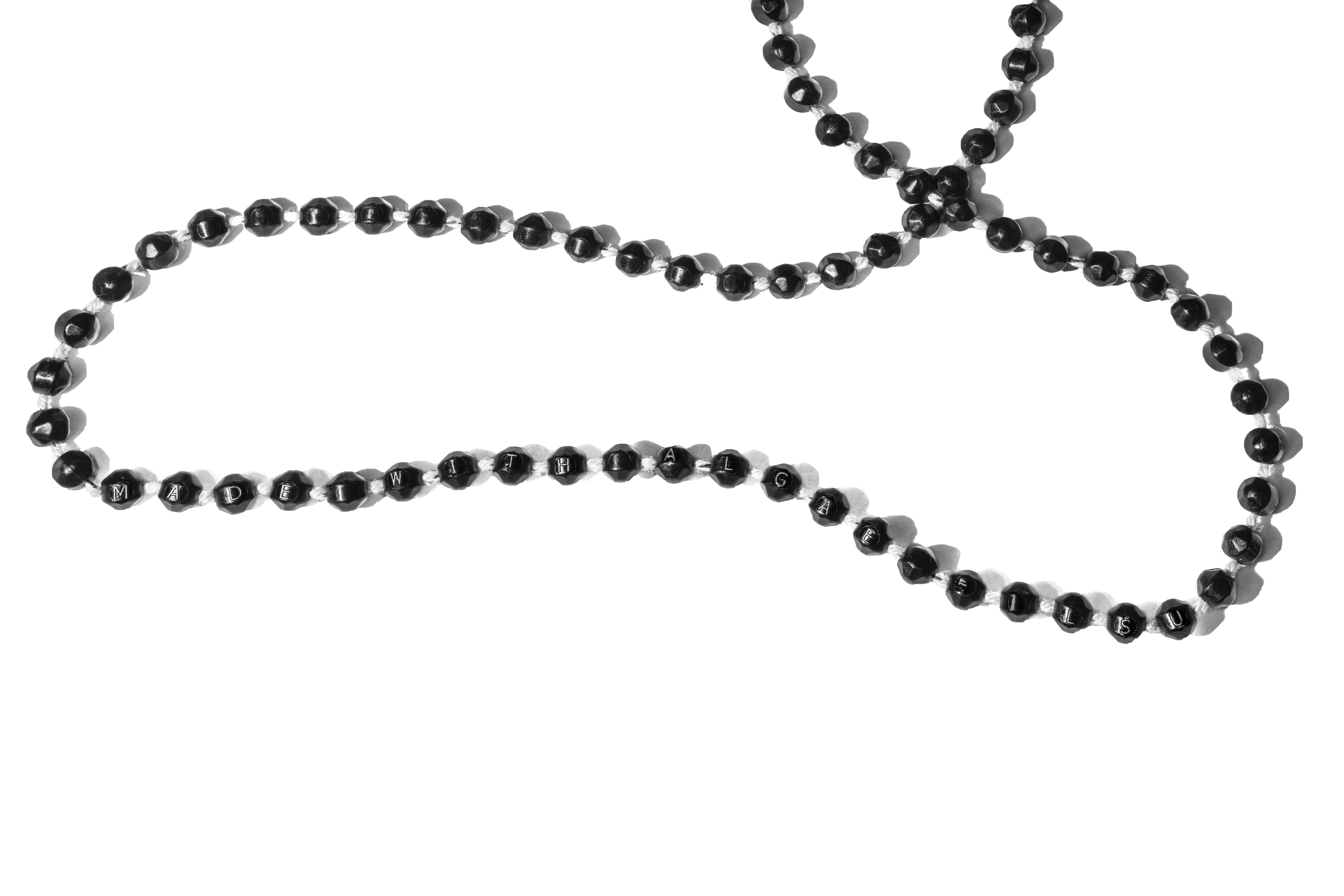 Each LSU biodegradable Mardi Gras bead has a protruding letter that together reads: “MADE WITH ALGAE LSU.

Photos and video available upon request.