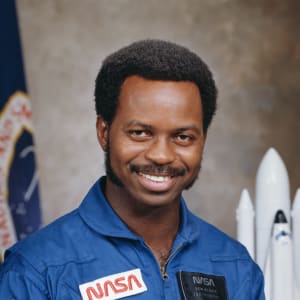 Physicist Ronald Erwin McNair was America’s second black astronaut and one of seven crew members killed in the space shuttle Challenger explosion January 28, 1986. The flight would have been his second voyage in space.

Although his death and those of his crew members were a national tragedy, this is not what distinguished him. McNair exemplified a life that knew no obstacles. He excelled academically despite the racial discrimination he experienced growing up in the South during the 1950s and 1960s. Later, in 1984 he broke the bonds of Earth as a scientist aboard the 10th space shuttle mission.

McNair was born October 12, 1950, in Lake City, S.C. His mother taught elementary school and his father was an automobile mechanic.

His academic and professional achievements were stellar: a Presidential Scholar, Ford Foundation Fellow, and Omega Psi Phi Scholar of the Year. He also was named Distinguished National Scientist by the National Society of Black Professional Engineers.

He developed an expertise in laser physics while working at the Hughes Research Laboratory in Malibu, California. In 1978, NASA selected him for the astronaut corps.

To commemorate his lifetime of accomplishments, the U.S. Department of Education, with funding from Congress, established the Ronald E. McNair Post-Baccalaureate Achievement Program to encourage minority and low-income, first-generation college students to enroll in graduate studies and acquire a doctorate degree.