On Friday December 8, 2017, LSU Board of Supervisors awarded Professor Ward Plummer the rank of Boyd Professor. The Boyd Professorship is the highest professorial rank awarded by the LSU System and is given only to professors who have attained national or international distinction for outstanding teaching and research. 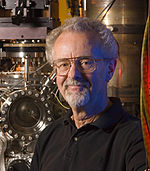 Plummer is the 75th Boyd Professor named across LSU, and the 49th from the Flagship campus to be awarded the coveted title since it was established in 1953 to honor brothers David and Thomas Boyd, early faculty members and presidents of LSU. With this appointment, there are now 11 active Boyd Professors at the Flagship University.

Plummer joined the LSU faculty in January of 2009, as part of the Multidisciplinary Hiring Initiative in Materials Science and Engineering. He is a member of the National Academy of Sciences and a fellow of the American Academy of Arts and Sciences.

Earlier this year, Plummer was honored with the Award for International Scientific Cooperation from the Chinese Academy of Sciences. He is the only physicist from the United States to have ever received this award. In January of 2018, he will receive the China International Science and Technology Cooperation Award from the president of China, Jinping Xi.

In her nomination letter for Plummer, LSU College of Science Dean Cynthia Peterson wrote, “On the basis of his exceptional career of first-rate world-class research, his outstanding preparation of our next-generation scientists and his generous service contributions to the university and the profession, I am proud to submit Dr. Plummer’s nomination as a Boyd Professor. I am proud to have such a distinguished colleague who is universally held in high regard by leading scientists around the world.”

Comments from the external evaluators included, Dr. Plummer is “the best surface scientist in the world,” who “produces the best PhD students in surface science in the world.” Another noted that “he is a true pioneer of the physics of surfaces and interfaces” and that he has the capability to “change the landscape in experimental surface physics in the US and the world.”

Nominations for the Boyd Professorship are evaluated by the LSU Boyd Professor Review Committee, which seeks confidential evaluations from distinguished scholars in the candidate’s field of expertise. Once endorsed by the review committee, the nomination is forwarded to the LSU president and Board of Supervisors for approval.