Threads and Treads of The Past: Prehistoric Fabrics and Footwear from Louisiana and Missouri 6400 B.C. to 1200 A.D.

Fibers, fabrics, and footwear were among the many archaeological remains recovered from Arnold Research Cave in Callaway County, Missouri. The cave is a classic largemouth solution cavity located along the Missouri River bluffs. In areas that remained perpetually dry, these normally perishable artifacts escaped destruction by the physical elements. Evidence indicates that the cave was first occupied as early as the ninth millennium B.C. and has continued to be used by man from that time into the modern era. Numerous pieces of twisted and plied cordage and of braided cordage were recovered along with twined fabric specimens. A twined bag is the most nearly complete of the textile artifacts. Two fragments of spaced, S-twined fabrics had been repaired with course thread to extend their usefulness. Both leaf and stem (bast) fibers from plants were used to make these items.

The footwear specimens from Arnold Research Cave provide examples from more than 7000 years of prehistoric footwear production. They include the oldest dated specimen recovered in North America east of the Rocky Mountains. Of the eighteen complete to partially complete examples of footwear, all but two were made entirely from plant materials. These two were made of flat pieces of leather with fiber cordage used to draw them around the foot. Both sandals and slip-on styles were made. No matching pairs of shoes were recovered. Most of the specimens had breaks or holes worn in the soles, particularly in the heel and ball of the foot, some of which had been repaired. This collection of footwear is important because of the number of well preserved specimens, the variety of styles and construction techniques used, and the different cultural periods represented. 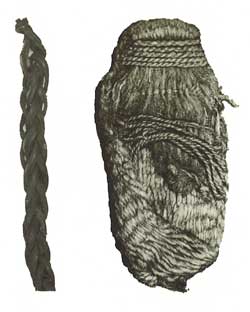 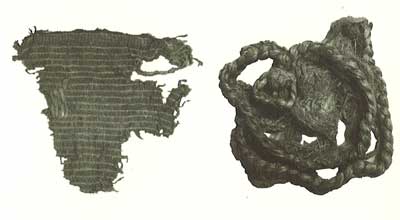 Pieces of twisted fiber cordage and fragmentary textile remains were recovered on Avery Island in Iberia Parish, Louisiana, during the excavation of a salt mine shaft. The unique saline conditions found in this area of Avery Island, 23 to 32 feet below the surface of the ground, preserved these textile remains along with other normally perishable prehistoric plant materials. The earliest textile specimen dates to 2800 B.C. and is the oldest known flexible fabric from Louisiana and among the oldest in the Southeast. Both interlacing and twining were used in textile construction. An example of twill plaited, rigid split-cane basketry or matting dates to ca. 2300 B.C. 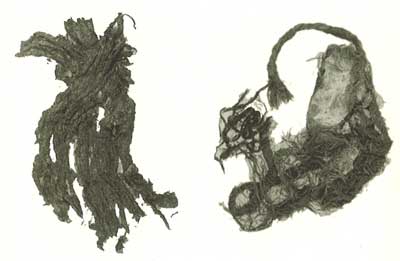 The Bayou Jasmine archaeological site is located in St. John the Baptist Parish in South Louisiana. Specimens of braided cordage and rhizomes from plants used to produce the cordage were recovered from spoil banks created when a dragline cut through the site during the construction of Interstate 55. Known prehistoric occupations at Bayou Jasmine extend in time from Poverty Point through Mississippian periods or from about 1500 B.C. to A.D. 1400.

This fine cordage is the second oldest, documented cordage remains from Louisiana. It was most likely used in a variety of ways. However, fishing was an important activity that took place at Bayou Jasmine, and cordage often played an important part in prehistoric fishing technology. The cordage may well have served as either a drop line or a trot line. 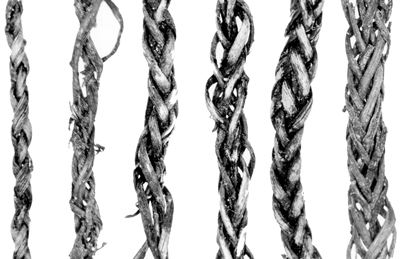 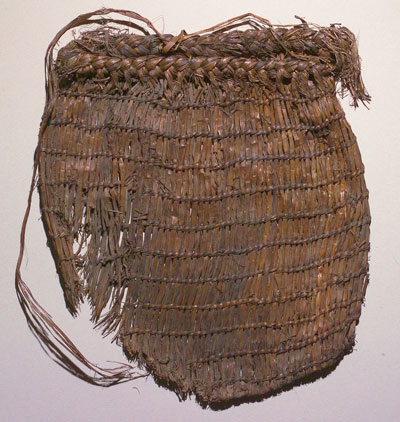 Twined bag (ca. 800 B. C) from Arnold Research Cave made of unprocessed leaves from the rattlesnake master plant.

Both leaf and stem (bast) fibers from plants were used to make these items. Leaves from the plant commonly known as rattlesnake master or button snake root (eryngium yuccifolium) have been identified as the fiber source for several specimens, including the twined bag and many of the shoes. Plant materials were also used as lining or padding in some footwear specimens. 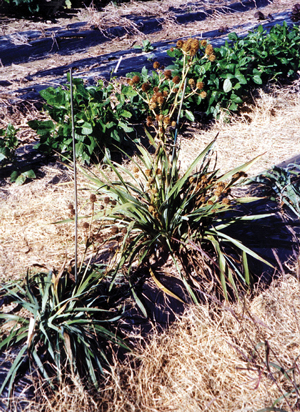 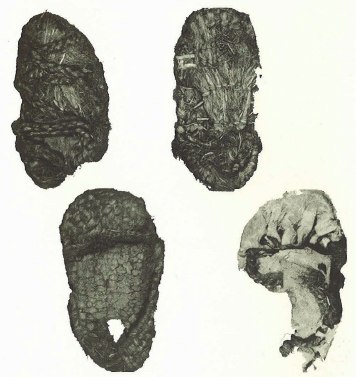 The lectures were cooperatively sponsored by the Louisiana Archaeological Society, LSU Museum of Natural Science, and LSU School of Human Ecology. The exhibition was based on textile and fiber research conducted by Jenna Tedrick Kuttruff, Mary Strickland-Olsen, Sandra Gail DeHart, and Marie Scott Standifer; Carl Kuttruff and Michael J. O'Brien served as archaeological consultants. The exhibition was supported in part by Edward M. Simmons of Avery Island and the Friends of the LSU Textile & Costume Museum.