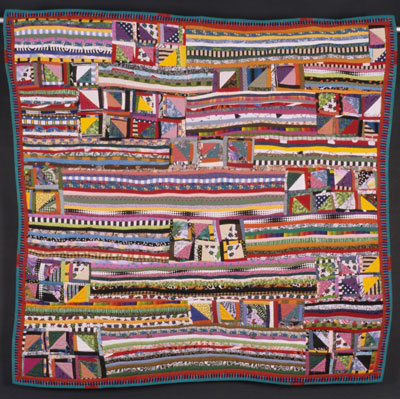 Although quilting did not originate in this country, it has developed into a form that is distinctly American. The earliest quilts produced in the colonies were most often whole cloth quilts, usually in solid colors, sometimes with appliqué work. American pieced or patchwork quilt examples date from the late 18th century and employ small geometric pieces of fabric sewn together to form a single large textile for the quilt top. The pieces may be made from purchased fabric or from scraps of leftover cloth, the arrangement of which requires more extensive decision making on the part of the quilter.

By the first decades of the 19th century, block quilting, composed of a series of repeating pieced blocks with the same design, had developed. One of the most well-known block names, "Log Cabin," is made from strips of fabric arranged to form a square enclosure. It is one of the most enduring patterns and lends itself to much variation as well as making possible intense graphic effects. Album quilts, with individual pieced or appliquéd blocks each designed and made by a different quilter, and silk patchwork crazy quilts followed in popularity. During the Great Depression, quilts pieced from pastel cotton solids and prints, in patterns like "Grandmother's Flower Garden," "Double Wedding Ring," and "Sunbonnet Sue," were favored.

American quilts have been described by Robert Shaw, an authority on this country's crafts and folk art, as a democratic art form in that they have been made and used by all, regardless of sex, socioeconomic background, geographic location, religious affiliation, ethnic origin, professional status, or art training. Each quitter brings his or her own personal and community history to the form. 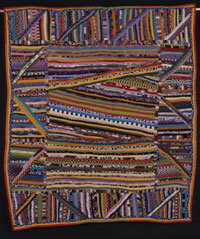 "Quiltmaking is a ... democratic activity, accessible to anyone with ... an urge for self-expression, and an eye for beauty”
Robert Shaw

The best known construction technique in African-American quilting is the "strip" quilt, a pieced quilt with pieces sewn together into long narrow strips that are then joined to form the quilt top.
The strips are often made up of pieces of differing sizes, which are sometimes the smallest usable rectangles of cloth and are called "strings". The strips are also characterized by pieces in varying colors and patterns and usually run the full length or width of the textile.

The strip pieces are often cut freehand without template guides, so that variations occur from piece to piece. Wahlaman, in Signs and Symbols, African-American Images in African-American Quilts, describes the incorporating of variations as an example of African-American use of flexible patterning. The method results from the quilter choosing a traditional Euro-American pattern, establishing a pattern in one block, and then purposefully varying it in size, arrangement, and color in successive blocks. Choosing this method is an aesthetic decision rather than one based on a lack of cloth in any particular size, color, or pattern. 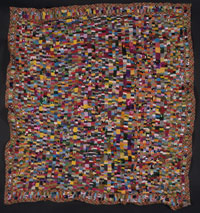 Born in 1927 on Kleinpeter Plantation outside Baton Rouge, Louisiana, Anna Williams was first exposed to quilting as a young child who picked up her mother's and grandmother's scraps as the colorful pieces fell to the floor. Her first experimentations with textile design began as she converted these scraps to dresses for a "weed" doll and then into her first quilt, a baby quilt, at age nine. Just as her quilts are today, her early projects were piecework.

Today, Anna's piecing may be rectangular strip piecing, which she terms "strings," or may be in variations of the "Log Cabin" block, She also designs quilts incorporating triangular pieces that Anna refers to as being in a "Monkey Wrench" pattern. Extensive experimentation throughout her prolific career has resulted in complex versions of each of these traditional American patterns. Her fabric choices are not limited to small scrap pieces, with little variety in color or print; however, she often chooses to cut each down to a small bit of fabric prior to piecing. Like other African-American improvisational quilters, she uses no template for cutting. She plays with her colors and the resulting strips or blocks just as she did as a child until she innately feels the arrangement is aesthetically pleasing to her eye. This methodology often leads to irregularity in block and quilt shape.

Anna's success as a quilt artist is evident in the recognition she continues to receive from not only internationally acknowledged quilt scholars and artists, but also from community leaders who selected her as Art Council of Greater Baton Rouge Arts Ambassador Artist in 1997.