A World of Dolls: The Dabney Collection and Beyond

Dolls of the World. Dolls, three-dimensional representations of the human figure, have been used by man over many millennia in diverse ways and often have had multiple functions. Within their societies of origin, dolls have been used as idols, ancestor images, fetishes, amulets, talismans, votive images, funeral images, mannequins, objects of art, and objects of play. Today, dolls are most often considered as toys Of playthings that resemble the human form; however, they a:-e and have been the playthings of adults as when as children. In the fa.st, fashion dolls have provided an important means of communicating the latest fashion modes in Europe and throughout the world. Dolls have also been used as decorative items to be displayed in the drawing-room or other places of prominence.

Carl Fox, who explored various definitions for dolls in his writings in The Doll, concluded that "more questions than answers have often found, which is perhap5 not a bad thing when dealing with a subject everyone takes for granted. ...the doll is best known by its associations. There is not one doll or one criterion. Everything depends on the confluence of time and attitudes past and present." (1)

Throughout the world, dolls have been made from nearly every conceivable material and combinations of materials. European and American dolls, however, have been most commonly made of wood, papier mache and other Compositions, ceramics, leather, wax, fabric, rubber, metal, and celluloid.

The  collecting of doll  is not a new phenomenon, but it has become a passion for many thousands of people in this century. This penchant for collecting, the  joy and connoisseurship that surround collectors and their desire to preserve and share, has made possible the preservation of what some might call the trivia of history throng h a proliferation of boors on dolls. Along with the increase of doll publications is the increase of museums and exhibitions devoted to dolls throughout the United States and abroad. With prices for rare dolls reaching over $150,000 and prices for many dolls ever on the rise, dolls have now become an area of investment.

Edith Dabney's Doll Collection. Edith Dabney, a former professor of speech and costume design at LSU, began collecting dolls quite unintentionally. Students in her first college class in costume design returned from the Thanksgiving holidays with twenty-five dolls to use as resources in their class. Thus, period dolls in period costumes became an important method of teaching used by Miss. Dabney in her costume classes. Many of the dolls in her collection, which came to number over three-hundred, were gifts from students, friends, or just persons looking for a good home for a treasured doll. According to Miss Dabney, "Not all the dolls are historically interesting but they are all colorful and intriguing."

Having received her Master's degree in fine and dramatic arts with emphasis on stage costuming and design from Columbia University, Miss. Dabney came to LSU to teach in 1941  from Kirksville State Teachers College in Missouri. She retired in 1956 after fifteen years of service in the Speech Department. In addition to teaching classes, she also worked as the costumer for LSU dramatic and operatic products. Edith Dabney coauthored with C. M. Wise, also of LSU’s Speech Department, two books on costuming, A book of Dramatic Costume in 1930 and Dramatic Costume for Children in 1949.

In 1969 Miss Dabney donated sixty-eigh dolls from her personal collection to the LSU Library. The dolls originated from all parts of the world and include antique European and American dolls as well as American folk-art and Indian dolls. The oldest doll in the collection dates to the 1700s. 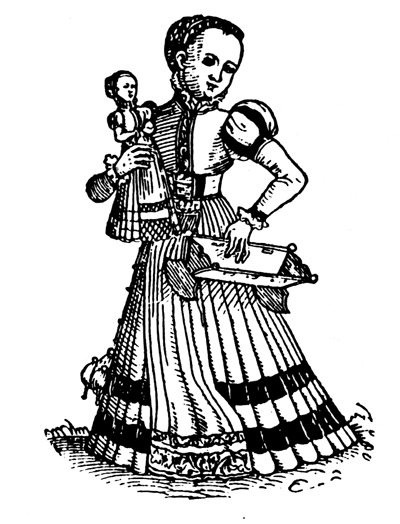 Special thanks for their assistance go to Elaine Smyth and her staff of Hill Memorial Library, to Pamela Rabalais, Mary Strickland and Lauren Landry of the School of Human Ecology, and to Carl Kuttruff, William H. Carter, and Capitol City Glass. The support and enthusiasm of members of The Dolls of Baton Rouge Antique Doll Club is also sincerely appreciated.

Installations for this exhibition were placed in two spaces, room 140 of the Textile and Costume Museum in the Human Ecology Building from and on the second floor of the Lobby of Hill Memorial Library from January 17 - March 1, 1993.

Originally constructed in 1925 as the main library for the campus, Hill Memorial Library was renovated from 1983-85 to house the LSU Libraries' Special Collections. It features a security system, special environmental controls, and elaborate fire detection and suppression systems for ensuring the preservation of the irreplaceable rare books and manuscripts that are housed in Special Collections. In addition to the two large reading rooms, extensive closed stacks, and work space for staff, the building provides a lecture hall and exhibition galleries.