In New York City, the capital of American fashion, names such as Hattie Carnegie, Claire McCardell, Balenciaga, Christian Dior, and Coco Chanel made headlines in the 1940s. Perhaps more familiar to many American women during the same time period were the names Bemis Brothers and Percy Kent, two of the many manufacturers of commodity bags. Commodity bags, woven fabric bags that originally packaged products such as animal feed, flour, sugar, and salt, were an important resource in home sewing for women from the 1930s through the 1960s. The manner in which women practiced the adage “use it up, wear it out, make it do or do without” as they converted empty commodity bags speaks through the extant clothing and household textiles made by them, much as a page from a diary, offering a personal glimpse of life long past. This exhibition illustrates the history and uses of commodity bags in the mid-twentieth century. The goal of the exhibit is to educate visitors about commodity bags and the many ways they were used by industrious women to clothe their families and decorate their homes. The exhibition highlights what commodity bags were made of, who made the bags and recycled them, why they were produced and used, where they were most widely available, when they experienced the highest popularity, and how bags were marketed to consumers.

Commodity bags were first used in the nineteenth century when farmers made them to carry grain to and from the mill where it was ground into flour. These early bags were made from coarse un-dyed fabric which was often hand-woven at home. Bags were marked with the farmer’s initials or other identifying characteristics so that their contents would not be mistaken for that of someone else.

The invention of the sewing machine in 1846 ushered in the era of commercially made commodity bags. These bags were generally made of cotton and were white or off-white in color with a printed logo. The first, best-known, and most successful manufacturers of machine-sewn commodity bags whose influence continued well into the mid-twentieth century included:

By the end of the nineteenth century, textile bags became the packaging of choice over wooden barrels and tins for packaging commodities.

A Yard of Free Fabric

Recycling is hardly a new concept. From their beginnings in the 19th century, empty commodity bags have been converted to other uses. Women worked hard to wash, bleach, and even dye empty commodity bags to transform them into household textiles and family clothing. Removing the inked labels on sacks was the most challenging aspect of recycling the sacks. Advice on the best way to accomplish this task was plentiful and included covering the inked areas with lard and soaking the entire bag overnight in kerosene prior to washing.

Commodity bags were recycled both in rural and urban areas. Women in town could acquire bags when purchasing staple goods such as flour, sugar, and salt at their local grocery stores. For larger sizes of flour bags, some women bought “empties” from bakers for only pennies a piece. Empty flour sacks could also be purchased through catalogs such as Montgomery Ward. In addition to these sources, women in rural areas often had access to a large supply of empty animal feed sacks, which were packaged in much larger bags and resulted in a greater amount of fabric than their city counterparts typically had to utilize. In many communities nation-wide, women also swapped sacks with friends and neighbors to obtain the required amount or specific fabric they needed for a project.

A 100-pound sack of chicken feed yielded approximately one yard of fabric—just enough for a woman’s apron, a child’s romper, a small tablecloth, or a set of kitchen curtains. Three or more of these sacks could make a woman’s dress. Ten and 25-pound flour sacks were routinely unstitched, hemmed, and used as sturdy kitchen dishtowels. Five pound salt sacks, made of thin, soft fabric, were the perfect size for a handkerchief. Full sacks could be used for pillow cases or quilt backing and smaller scraps could be pieced for quilt tops.

The popularity of the use of commodity bags to make garments and home textiles was heavily influenced by the Great Depression and World War II  The severe economic downturn and subsequent shortage of materials made commodity bag fabrics valuable products.

In the 1930s commodity bag manufacturers took notice of the amount of work thrifty women undertook to clean and color commodity bag fabric. It was realized that selling commodity bags that had easy-to-remove inked labels would encourage women to buy one brand of a product over another. Paper labels that were stitched or glued to the fabric bags, a practice started in the 1920s, also gained popularity, eventually replacing inked labels for finer quality sacks. Soon manufacturers also determined that supplying commodities in packaging that was already-colored could dramatically increase sales. Next, manufacturers experimented with adding prints to the bags. The printed bags were so successful that when choosing new design prints for a season, one manufacturer regularly consulted groups of women to determine which they liked best. Even at the increased cost of five to seven cents for dyed and printed bags over plain white bags, colorful packaged commodities quickly became a standard item at feed and grocery stores.

At the same time colors and prints were added to the bags, the fabric itself underwent a change as well. While many commodity bags were still made from the traditional coarse fabrics, more and more manufacturers began to sell some of their products in finer, higher grade commodity bag fabric. This smooth, soft fabric was equal in quality to that of sheets and pillowcases available in department stores.

Once commodity bags were available in attractive colors and a wide variety of prints, it was no longer a “man’s job” to buy the chicken feed. Women now traveled to the feed store to choose from the “fabrics” they wanted for upcoming sewing projects. Savvy feed store employees stacked new shipments of feed sacks according to prints, making it easier to tell how many of a particular print was in stock and resulting in less work moving large sacks of feed when female customers desired a particular print. This shift in marketing was pivotal in the sales of commodity bags for more than three decades.
Other incentives sparked sales of commodity bags as well. Printed needlework and sewing patterns were common on the backs of plain white or off-white sacks, as were quilt patterns and dolls. Flour and sugar sacks might have recipes printed on paper labels on the backs of sacks. Later bags had border prints to look like pillowcases or curtains and some smaller sacks were even hemmed and included a drawstring, so that when the commodity bag string was removed, the purchaser would have a ready-made apron.

Booklets published by the Textile Bag Manufacturer’s Association as early as the 1920s, and later by the National Cotton Council, advocated the many uses of commodity bags. Commercial pattern companies such as Simplicity promoted their patterns in the booklets to demonstrate how a wide variety of products could be made from the range of sizes of commodity bags available.

Contests sponsored by the National Cotton Council encouraged sewing with commodity bags in the 1950s and 1960s. At state fairs around the country women could enter their commodity bag item in an array of categories for prizes ranging from one dollar to trips and household appliances.

Louisiana crops were also packaged in commodity bags. Those bags that remain are some of the last reminders of the small manufacturers that once dotted the Louisiana landscape. From bags that held rice packaged in Plaquemine and Baton Rouge to those filled with sugar in New Orleans, the empty sacks serve as silent histories of long-shuttered mills.

Is it a Feed Sack?

It can be difficult to determine whether or not fabric, a garment, or a household textile is of commodity bag origin. Because some fabric sold to commodity bag manufacturers to make bags was also sold to retail stores for sale off-the-bolt to customers, judging by fabric texture or print alone is inaccurate.

Isolating evidence of the original bag on an item usually takes one of two forms. The first is identifying portions of the original label, particularly if it was inked. Regardless of the number of times washed, many inked labels never completely faded, one reason quilt backing and undergarments were common products sewn from fabric that still had portions of the labels remaining. The second is locating stitch holes from where the thick stitching string sewing the bag together was removed. Often times, seamstresses could cut around these holes or repeated washings would minimize their appearance. Locations where stitch holes are commonly seen include portions of the textile that were cut near the selvages of the commodity bag fabric, often found incorporated in garment seam allowances. 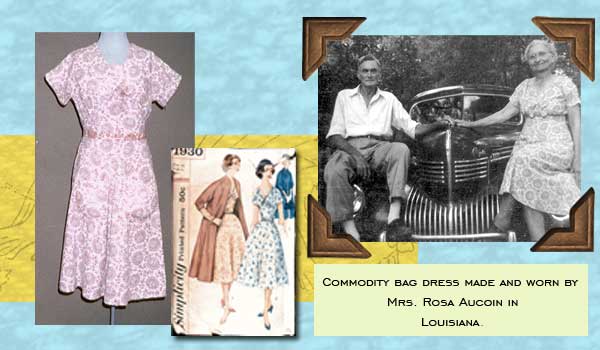 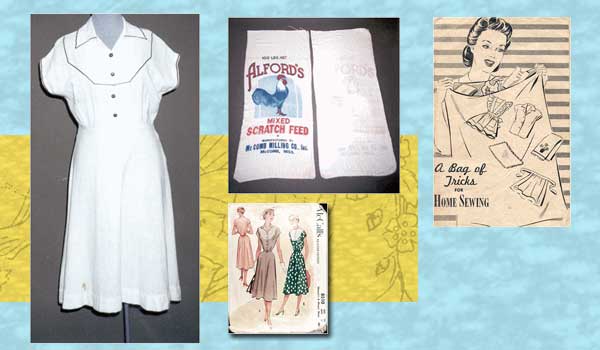