The uniqueness of the Acadian or Cajun culture and its craft work was observed as early as 1812 when Louisiana’s first governor, William C. C. Claiborne, sent to the White House an Acadian handwoven cotton blanket. Attention was also brought to Acadian crafts at late nineteenth century world's fairs held in New Orleans, Minneapolis, Chicago, and Atlanta. Sarah Avery Leeds, a member of a prominent family in south Louisiana, is given credit for including Acadian craft in these expositions as well as promotion through the New Orleans Women's Christian Exchange, a charitable philanthropy whose consignment shop marketed Acadian homespun textiles.

Many aspects of the Acadians' distinctive traditions were perpetuated into the twentieth century. In 1929, a second Acadian blanket was sent to the White House through the efforts of another Louisiana woman, Susan W. Anding, of Opelusas. However, the culture's ethnic identity was threatened as the century progressed by the advent of mass communication, the building of highways into once isolated Acadian areas, and the compulsory English education ruling. It was in this climate that Louise Olivier became involved in promoting the production of traditional craft work among the Louisiana Acadians. 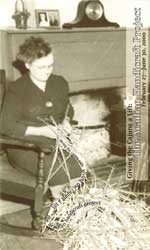 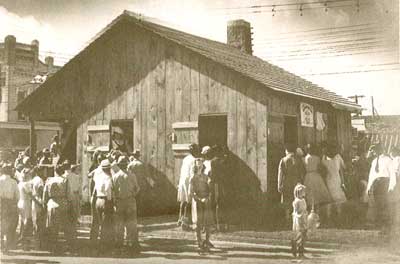 Louise Veronique Olivier, affectionately known as "LouLou," was of Acadian descent, born in 1906 in Arnaudville, Louisiana. After receiving both undergraduate and graduate degrees in music and French, she was appointed in 1938 as director, or field representative, of the Louisiana State University General Extension Division's French Project. The program sponsored a series of radio broadcasts in French to rural Acadian assemblies of listeners, called Assemblees Francaises. At these parish-wide gatherings, LouLou collected and recorded French songs, stories, games, and dances unique to each assembly area. A second phase of the project conducted Assemblees with elaborate programs of song and dance, often including school children, and many times with craft displays. In the two-year period of the phase's duration, attendance ranged from 300 to 3000 at the 29 events scheduled.

Yet a third phase of the French Project began in 1942 when gas rationing constraints due to U. S. involvement in World War II limited mass gatherings such as the Assemblees. Although her personal crusade to preserve the French language continued throughout her life, LouLou determined that the most effective channel to perpetuate the French Project at this point was to develop Acadian crafts as a movement in itself. Hence, the Acadian Handicraft Project began its activity in reviving, encouraging, developing, and perpetuating Acadian crafts by furnishing a sales outlet for Acadian women involved in craft production. 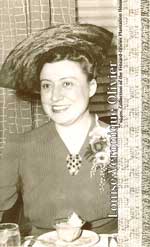 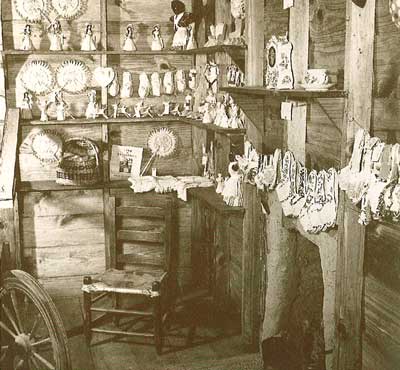 Describing herself as similar to the Acadian "marchand en Mite" who peddled his merchandise in a box, LouLou began by traveling with craft samples from gift shops to libraries to the State Fair Grounds, advancing to the 1949 International Lions Club Convention in New York's Madison Square Garden. Augmenting major programs were craft demonstrators dressed in Acadian costume with weavers working at large Acadian hand-hewn looms and spinning wheels.

LouLou characterized her samples and the project's craft focus as evolving from three basic articles that were traditional to the Louisiana Acadians: the handwoven blanket, the palmetto braided hat, and the "old-fashioned child's brassiere" or undershirt. Blankets were customarily produced by Acadian weavers for their children's dowries. But, to compete in a modern marketplace, smaller items, such as place mats, napkins, finger tip towels, and pot holders, were added to her assortment. Likewise, accompanying the traditional man's palmetto field hat in LouLou's box were palmetto purses, shoe-shaped thread holders, tiny horse bookmarks, and miniature hats filled with gumbo file seasoning. The brassiere was translated into a diaper shirt that developed into 45 different versions by 1950 with 1,504 sold that year. Adaptations to the shirt also responded to market demand and more than 30 additional infant garments evolved. Stuffed sock monkey dolls, ceramic ashtrays in the shape of the state of Louisiana, and cocklebur lapel pins also became part of the project's product mix. A very significant shift, in not only craft focus but also target group, occurred when the Acadian Handicraft Project included the craft skills of the Coushatta Indians whose baskets were woven of native split cane and pine needles.

An astute business person, LouLou copyrighted a trademark, produced Acadian Handicraft Project labels with that image, and determined that three cents would be deducted from items received from craft workers to which the labels had not been attached. Full scale reproductions of the trademark image, a primitive Acadian house with mud chimney and front porch attic stairway, were then constructed to serve as craft shops at Louisiana Rice Festivals and on the grounds of the longfellow Evangeline Memorial State Park in St. Martinville. Recognizing the importance of networking in a business, LouLou established connections with other craft revivals and cultural movements in the country, such as the National Folk Festival. A lengthy and close relationship developed between Sarah Gertrude Knott, its director, and LouLou, following the participation of the Louisiana Acadians in the 1936 Dallas Festival that acquainted festival audiences with not only Acadian music but also Acadian crafts. LouLou promoted the project internationally as well by collecting infant items from project sewers for a friendship parcel sent to rural families in France following World War II. 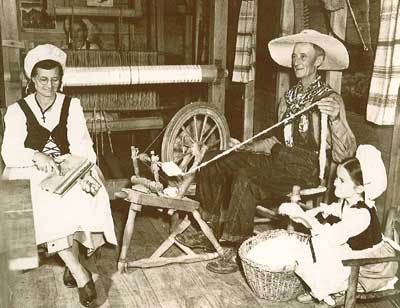 LouLou's networking also included newsmen, popular magazine writers, and novelists, such as Frances Parkinson Keyes and Harnett T. Kane, for whom she provided material about the Acadian culture and from whom she sought aid in her extraordinary promotional efforts. Among the few accolades she received during her lifetime was a diploma of the Palmes Academiques awarded her in 1955 by the French Government through the Consul General of France, New Orleans, for her efforts in promoting the French language.

LouLou initiated the Acadian Handicraft Project during a period when Acadian language and culture did not enjoy the popularity it has experienced since the project's untimely ending, with her death in 1962, at the height of its activity and success. But it was through her efforts that seeds for CODOFIL, the Council for Development of French in Louisiana, were planted and Acadian craft work was preserved. As eulogized by Mary Alice Fontenot, author of the popular Clovis Crawfish series of books, Louise Veronique Olivier gave the word "Cajun" a new dignity and status, emitting what Fontenot described as the "happiest laugh in Louisiana."

Acadian Craftsmen: Into the New Millennium"
Exhibition Opening Event
A forum of Acadian Handicraft Project participants and their contemporary counterparts will explore the project’s influence on the lives of those involved and on craft work in Louisiana today.
Sunday, February 27, 2 p.m.
Room 115 Human Ecology Building
Louisiana State University
Baton Rouge
Forum and Reception Open and Free to the Public

The information contained in this virtual scrapbook was taken from the publication that was issued in conjunction with the exhibition. The exhibition was funded in part through a grant from the Louisiana Endowment for the Humanities. School of Human Ecology and Friends of the LSU Textile & Costume Museum also provided support for this exhibition and related activities. Dr. Monica Santaella compiled this virtual scrapbook.