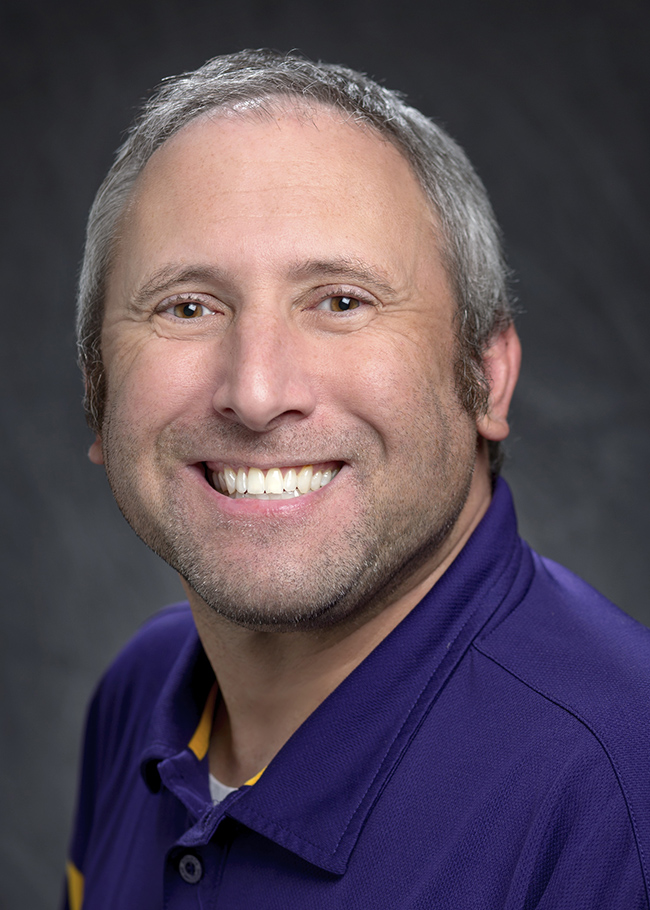 Mr. Fisher is in his twenty-fifth year at LSU, twenty-three on faculty for School of Kinesiology. Elevated to Senior Instructor rank in 2014, he provided instruction for seventeen different courses during his career. Currently he teaches:  Individual Wellness and Public Health (KIN 1600/fall, spring and summer), Coaching Basketball (KIN 2516/spring), Mental Health Issues (KIN 2604/summer and fall), Consumer Health (KIN 2603/spring), Psychology of Coaching (KIN 2526/fall, spring and every intersession) and Practicum for Teaching Individual and Team Sports (KIN 2525/every semester as needed). Mr. Fisher coordinates and supervises all physical activity credit exams for Kinesiology undergraduates.   Previously, he served as college liaison for Kinesiology student teachers/alternative certification participants. He is and has been a valuable member of several committees for the School of Kinesiology and College of Human Sciences & Education.

From 1997-2008 while on the Kinesiology faculty, he was Head Boys’ Basketball Coach and Associate Athletic Director at University Laboratory School. His teams won Louisiana High School Class AA State Championships in 2002 and 2004. He was selected District Coach of the Year in 1998, 2002, 2003, 2004, State Coach of the Year in 2004, and Head Coach for the 2004 Louisiana High School Coaching Association Boys’ Basketball All-Star Game. The 2004 team ranked as high as #9, finishing ranked # 17 nationally; the only top-twenty national ranking for any officially sponsored team sport in over one hundred years of athletics at University Laboratory School. He was the youngest boys’ coach in Baton Rouge prep basketball history to have teams win two state titles (age 31/March 2002 and age 33/March 2004).  Upon retirement from high school coaching, his final total record was 221-117. In 2011, he was Volunteer Assistant Men’s Basketball Coach at Baton Rouge Community College. From 2012-2018, Mr. Fisher was Head Boys’ Basketball Head Coach for middle school grades at Our Lady of Mercy Catholic Middle School in Baton Rouge. Prior to joining the Kinesiology faculty- from 1993-1996, Mr. Fisher served as Graduate Assistant and Restricted-Earnings Assistant Coach for LSU Men’s Basketball during the tenure of Head Coach Dale Brown. He was one of the youngest assistants in the history of the program.

In 2001, Mr. Fisher donated $10,000 to endow the ‘Harry Rabenhorst Memorial Scholarship’, awarded annually to a student pursuing a Kinesiology career. He donated $2,500 to LSU Laboratory School to begin the ‘Steve Delacroix IB Scholarship’, awarded to exceptional students successfully completing the International Baccalaureate curriculum.  Many articles he authored appear on blogs/websites about basketball coaching theory and team building. He is a member of LAHPERD- presenting numerous times at conventions about coaching or wellness topics. He is a member of the Louisiana Basketball Coaching Association.