Museum of Children’s Art at LSU: Creativity to promote lifelong love of learning

Our job as early childhood educators is to tap into this natural inclination to foster a lifelong love of learning. Curiosity has been demonstrated as a driver of academic achievement.

In this post, I’m talking about a book we created describing children’s interest in art; this exploration led to the creation of a Museum of Children’s Art (MOCA).

At our laboratory preschool, we foster a love of learning in children ages six weeks to four years old by giving children a voice in their education. We embrace creativity and child choice. Our educators act as facilitators, supporting child interest.

We use this approach to learning because research has linked creativity to openness to new ideas and critical thinking, which are recognized as skills necessary for success in the workplace today.

Embracing the core tenets of the Reggio Emilia philosophy, the following photographs and excerpts from our book illustrate how teacher Sarah West’s long-term project resulted in months-long study, using arts to foster problem solving and critical thinking for a class of children ages three to four.

Following content is from Museum of Children's Art: A Look at Documentation in a Reggio Inspired Program authored by Sarah West, MEd and Cynthia DiCarlo, PhD.

Chapter 1 – What is the Reggio Emilia Approach?

Excerpt: The Reggio Emilia-inspired philosophical approach to teaching and learning highlights the thoughts and ideas of a child’s interest and intense investigation through projects within the classroom.  A project begins with provocations. A provocation is an experience set up in response to a child's interests and ideas. Children are provided the opportunity to handle real and natural materials and experience real world challenges first hand.

The environment as the third teacher

the teacher serves to not only provide information, but to listen, observe and document (Rinaldi, 2012; Santin & Torruella, 2017; Thornton & Brunton, 2014)

Image of the child

children’s ideas are given serious consideration (Santin & Torruella, 2017; Thornton & Brunton, 2014). Components include design (plan or intended solution), discourse (reflective study of what is being said), and documentation (record of performance) (Forman & Fyfe, 2012, p. 249-250)

recognition that learning is socially constructed (Cagliari, Filippini & Giacopini, 2012; Santin & Torruella, 2017); with a strong focus on group learning (Thornton & Brunton, 2014) which defines children as co-constructors of their learning, rather than passive recipients (Malaguzzi, 1993)

Chapter 2 – How did the study of art begin?

Excerpt: Following their natural instinct to make, the art studio became the most popular learning area in our classroom.  The design of the art studio embraces the philosophy of the environment as the third teacher; children have access to a plethora of loose parts, recycled materials, and art supplies.  Using one another and the world around them as inspiration, their hands were always making something and they always wanted to share it with the rest of the class during reflection.  With such an interest and ownership in their art, we decided to go forth with a long-term project on the study of art. 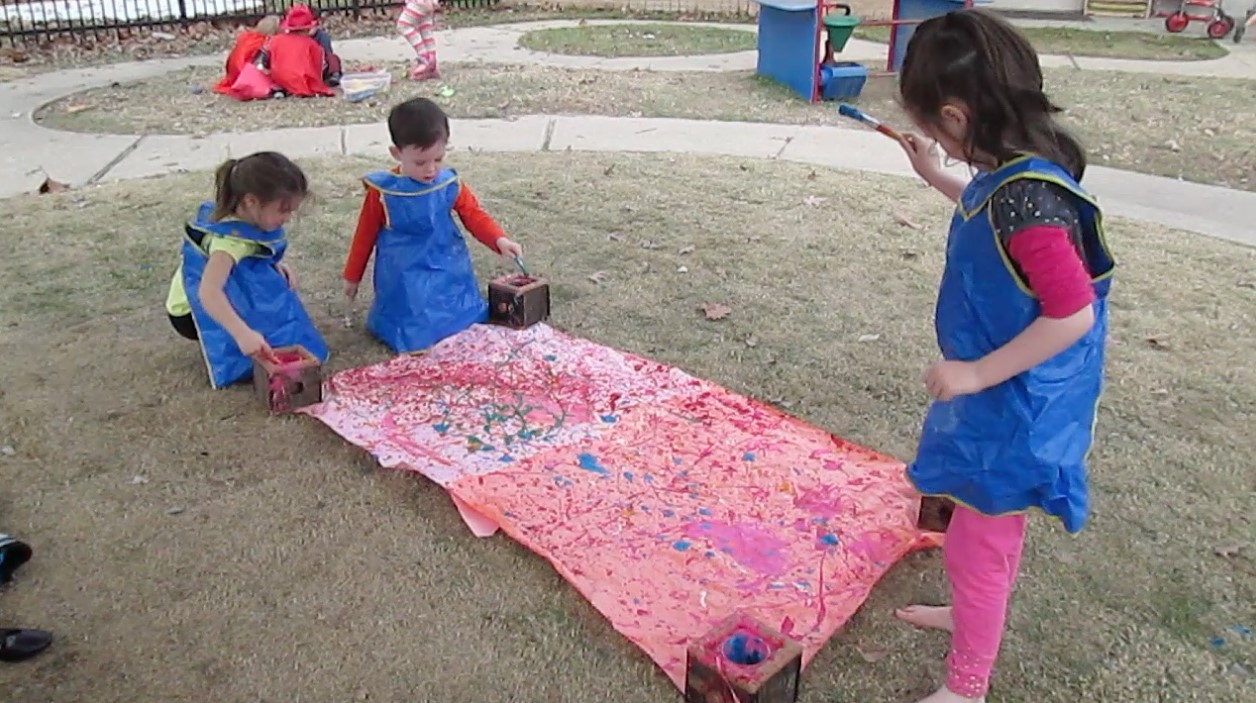 Excerpt: When the children began learning about individual artists and their techniques, they were interested in creating art similar to famous artist they had investigated. The teacher served as a teacher-researcher in both providing children with information, but also listening to children’s interests. Children were encouraged to respond to provocations provided by the work of the artists they had studied. These provocations included:

Jackson Pollock Splatter Art – The children were intrigued by Pollock’s art technique because it was so unlike any other they studied.  He used a large open area and, from their point of view, just threw paint.  His work was abstract by their definition.

Chapter 4 – Where did the idea of a museum come from?

Excerpt: Once the children began producing art inspired by these artists, the discussions in the classroom started to focus on where famous art was found, what people do with art, and then what to do with their art.  The classroom had a small “Masterpieces” display board, but it was overflowing.  Consistent with the powerful image of the child, the negotiated learning through this exploration was that children decided they wanted to open an art museum so their art could be displayed together like the work of famous artists.  They also wanted a place for visitors to view their masterpieces.

The teacher-researcher continued to honor the powerful image of the child. Following the mural creation, the negotiated learning with the children resulted in a shift in the design of the learning. The children had become interested in sculptures.  LSU has a sculpture garden located near the preschool.  Families, teachers, and the children took a walking field trip to visit the sculpture garden for inspiration. 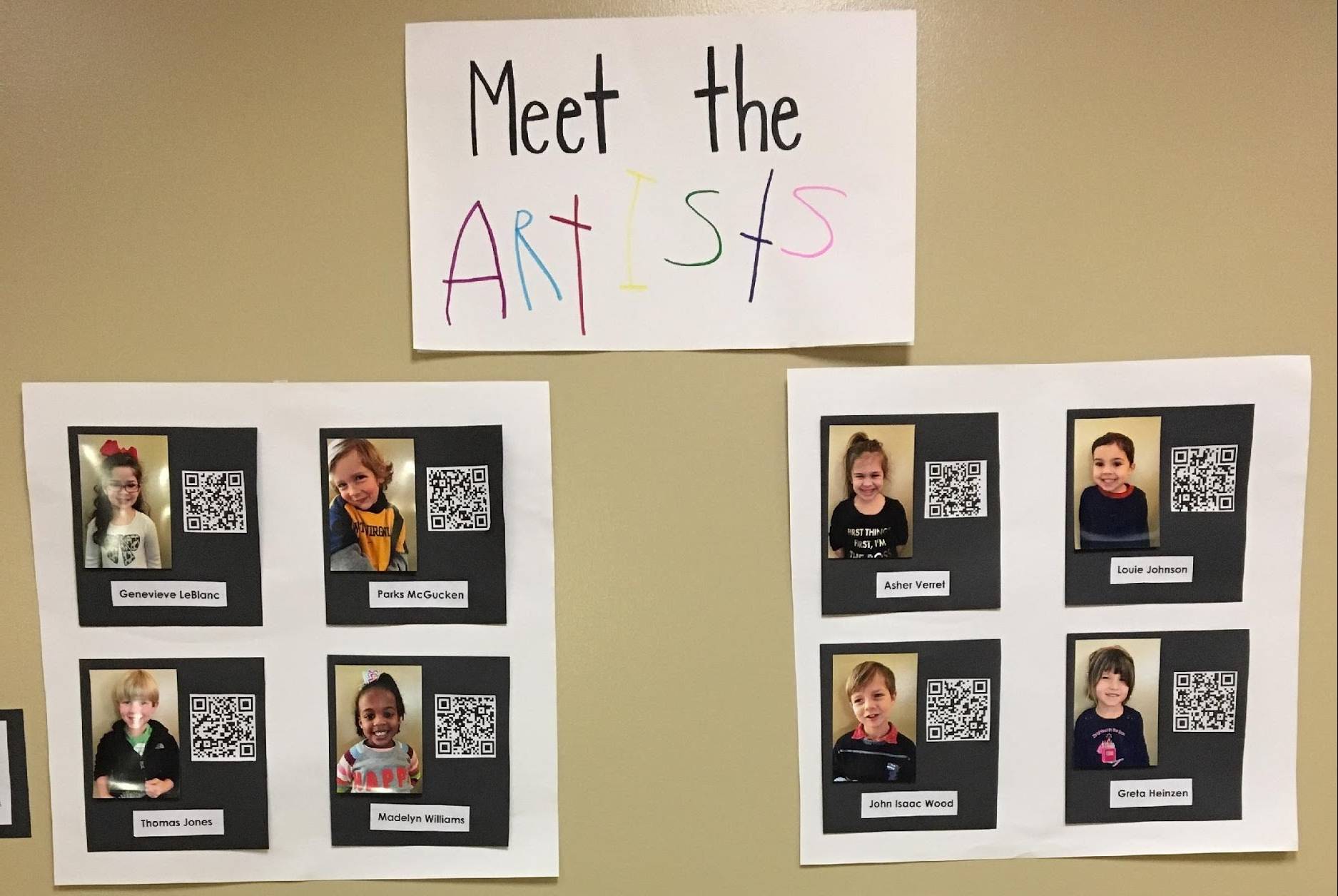 Technology integration - a discussion about visually impaired visitors to the LSU Museum of Children's Art leads to understanding and using QR codes.

Excerpt: When the children showed interest in textured art, the teacher presented them with a Braille book that had pictures that were textured.  After reading this book together the children asked, “How will visually impaired enjoy our museum?”  This began the making of textured art, but it wasn’t enough to satisfy their concern for including visually impaired in their museum.  The children brainstormed ideas, such as telling them when they visited, but they decided this wouldn’t be very accommodating.  Recognizing the children’s interest, the teacher-researcher introduced a new medium, consistent with the 100 languages of children. The teacher suggested attaching their voice descriptions to the pictures and utilizing something called a QR code.

The children were introduced to QR codes, identifying them in their environment, and how to scan a code.  From here, the children produced QR codes.

Chapter 7 – How does a real museum function?

Excerpt: The negotiated learning resulted in children designing jobs for the museum. In the classroom, the children created security cameras that watched the art while we were not at school. This called a need for the security cameras to be relocated to the new museum location for opening day and a need for security guards. The discourse surrounding this discussion among children was that the museum needed workers walking around answering questions about the art and especially questions about the QR scanners. The workers walking around could direct visitors to the bathroom if they needed, to specific displays of art, or to the artist who created a specific piece. The museum also had a need for greeters who invited visitors in and handed out tickets at the door. Visitors needed a ticket to get into the museum and to vote for their favorite art inspiration before they left. 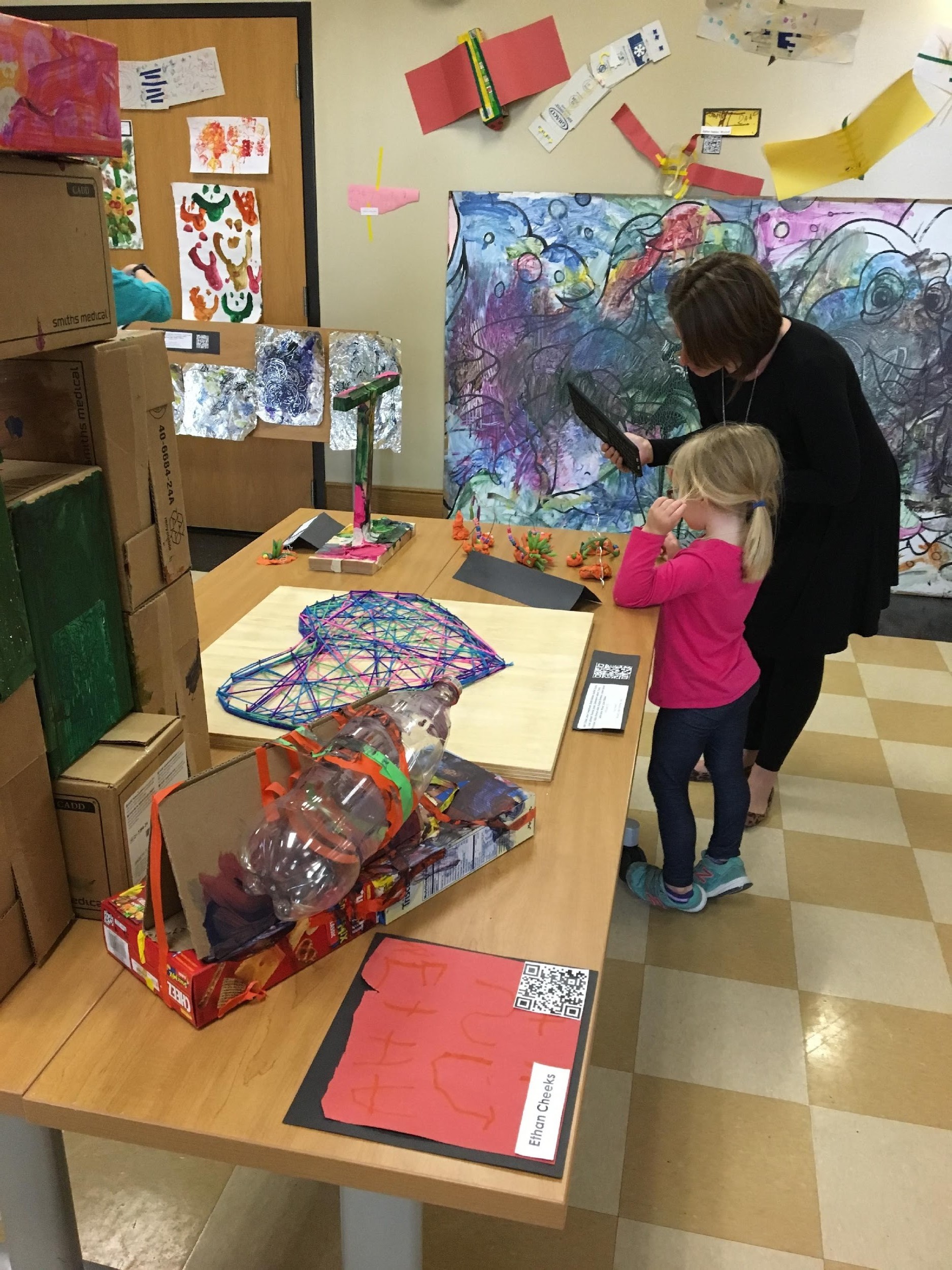 A student guides her visitor throughout the LSU Musem of Children's Art.

Chapter 8 – What came next?

Excerpt: After their interest in the topic began to fade, the children were introduced to the idea that art does not always mean a picture or a sculpture, it can be dancing, singing, or other types of performances, which is consistent with the 100 languages of children philosophy.

I hope this example of a long-term project inspires you to consider how you might incorporate project-based learning in your program.

We invite you to tour the LSU Early Childhood Education Laboratory Preschool. Learn more about our programs in early childhood education.