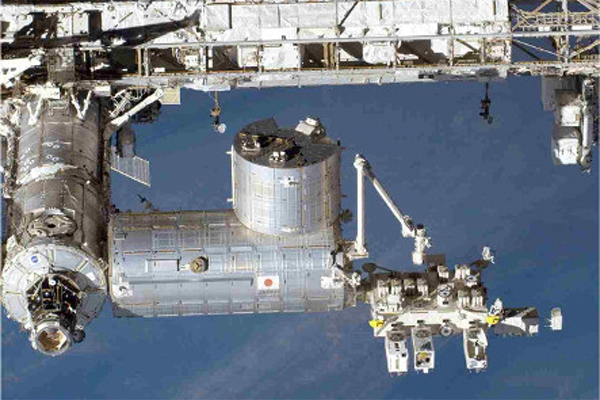 The CALET Cosmic Ray experiment, led by Professor Shoji Torii from Waseda University in Japan, along with collaborators from LSU and other researchers in the U.S. and abroad, have successfully carried out the high-precision measurement of cosmic-ray electron spectrum up to 3 tera electron volts (TeV) by using the CALorimetric Electron Telescope (CALET) on the Japanese Experimental Module, the Exposed Facility on the International Space Station (ISS). This experiment is the first to make direct measurements of such high energy electrons in space.

“High energy electrons are difficult to measure, but important because they potentially provide information about nearby astrophysical sources of high energy radiation and/or dark matter,” said Cherry. “The initial results provide a hint of anticipated structure in the high energy spectrum, which may indicate the presence of a nearby source of high energy particles like a pulsar or the annihilation of dark matter.”

CALET was installed on the ISS in August 2015 and has been accumulating scientific data since October 2015 with a goal of five years of operation. CALET is the first Japanese-led space-based mission dedicated to cosmic ray observations.

The origin and acceleration of cosmic rays are still one of the cosmic mysteries, and cosmic-ray electrons are one of the most important targets of high-energy cosmic ray research. However, in order to observe high-energy electrons, it is required to have (1) high-precision energy measurement of each cosmic ray particle, (2) sensitivity to detect the very rare electron flux, and (3) the capability to identify electrons buried under the over 1,000 times higher flux of cosmic ray protons. Thus the measurement of electrons above 1 TeV has been a difficult goal to achieve. The calorimeter of CALET, with its unique and crucial capabilities, enables scientists to perform accurate measurement of cosmic-ray electrons into the TeV region thanks to the long-term exposure available on the ISS.

This measurement demonstrates the ability of CALET to do a precise direct measurement of electrons above 1 TeV that was difficult for past experiments. With five years of observations, CALET will achieve nearly six times higher statistics compared to this first result, and will allow for reduction of the systematic uncertainties, including that from the detector response. The goal of the project is to push the energy limit to 20 TeV and to obtain the precise energy spectrum, hopefully making it possible to demonstrate definitively the presence of nearby astrophysical cosmic ray sources and/or to reveal the nature of dark matter.

For additional information about the science, see the CALET web site at http://calet.phys.lsu.edu and the NASA and JAXA press releases found there.