Today’s industry standard of whole genome analysis, used by many to track their ancestry, and in some cases genetic traits and predispositions, is based on the universal DNA array, invented by an LSU chemist and his colleagues at Weill Cornell Medicine and University of Minnesota in the 1990s. Robert P. Hammer, William A. Pryor Professor of Chemistry Emeritus, holds 39 US and international patents and is now being inducted as a fellow of the National Academy of Inventors, or NAI. 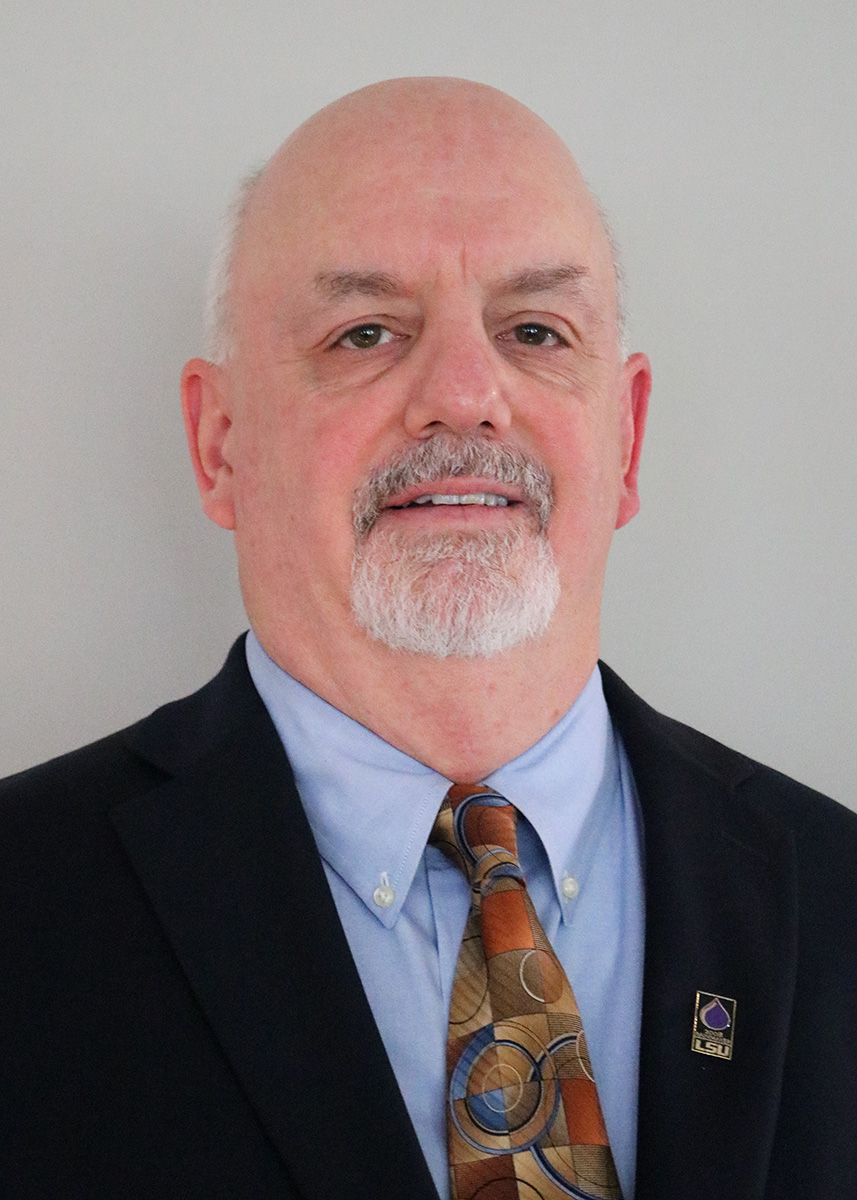 “The first thing I thought of when someone congratulated me on the NAI fellowship,” Hammer recalls, “is that I’ve had the good fortune to have great mentors and collaborators, and that’s what you need to do science and innovate these days.”

Hammer started his career as an assistant professor at LSU in 1992 after completing a postdoctoral fellowship focused on oligonucleotide chemistry with Professor Albert Eschenmoser at the Federal Institute of Technology, or ETH, in Zurich, Switzerland.

“It was difficult interviewing for academic positions in the US from Switzerland,” Hammer remembers. “I coordinated one trip where I did five interviews in what was probably two to three weeks. At LSU, I met a dynamic group of people in the chemistry department and they had just hired five or six highly talented people in the last year or two, including Isiah Warner, Steve Soper, and Robin McCarley. LSU was a great fit for me.”

In his early days at LSU, Hammer often reached out to his former PhD advisor at the University of Minnesota, George Barany, for advice and assistance. But he also received what he calls “strong” mentorship and support from his new LSU colleagues.

“My chemistry colleagues Rich Gandour [now at Virginia Tech], George Stanley [2018 Rainmaker], Mary Barkley [now at Case Western Reserve], and Andy Maverick were all immensely helpful in looking at things I’d written. They helped me organize my teaching and attract good graduate students to my lab,” he says. “George Stanley in particular was key to making sure assistant professors were included in graduate student recruiting and had good student collaborators in their research groups.”

... he kept us all focused on what was the most important—mentoring students, teaching, and getting research done. A very wise person. If you said something stupid like, ‘I’ll spend my time doing X,” and X was a complete waste of time, he’d say, ‘Don’t do X. Do Y.’

“As far as advice I received as an assistant professor,” Hammer continues, “I remember some pithy phrases from Rich Gandour, but mostly he kept us all focused on what was the most important—mentoring students, teaching, and getting research done. A very wise person. If you said something stupid like, ‘I’ll spend my time doing X,” and X was a complete waste of time, he’d say, ‘Don’t do X. Do Y.’ I’d go on about joining some committee and he’d say, ‘Well, you’re already on a number of committees that are doing really good work. Focus on mentoring and teaching.’ He got his point across.”

Hammer is the first to admit that he wasn’t much of a science prodigy as a kid. Although he was interested in math and science, he wasn’t sure what he wanted to do in life. His mother always encouraged him to become a doctor, so Hammer entered college as a psychology pre-medicine major. But he quickly realized that his interest was in chemistry. The main reason for that was Professor Steve Zumdahl, his freshman chemistry teacher at the University of Illinois Urbana-Champaign.

“He was a dynamic lecturer,” Hammer says. “And while the subject was difficult, he made it fun through great demonstrations and his overwhelming love of the subject.”

Hammer switched his major to chemistry with an emphasis on biochemistry as he’d always had an interest in biology.

“The next game changer for me was taking Advanced Organic Chemistry Laboratory with Professor Scott Denmark,” Hammer recalls. “He emphasized the discovery side of chemistry and that doing a reaction could yield unexpected results that one could figure out. I realized in that class that I wanted to do chemistry for a living. In his laboratory, I learned the beginnings of the craft and science of synthetic organic chemistry.”

“I began to understand that you could make a new organic chemical from ‘air, earth, fire, and water,’” Hammer continues. “That was just so cool; you could distill things or separate them using chromatography and apply some of the theory I’d learned in books to new discoveries and make a compound no one had ever made before.”

After getting his BS with Distinction in Chemistry, Hammer went to graduate school at the University of Minnesota, focusing on synthetic peptide chemistry.

“There I learned that organic chemistry and science in general is a collaborative endeavor,” he says. “George [Barany, PhD advisor] taught me how to organize my ideas and how to work with other talented scientists to make the whole project greater than the sum of our individual efforts.”

“The thing that excited me the most in graduate school was that when you had an idea or observed something, you could test it out, and then improve on your process or idea,” Hammer continues. “The ability to design experiments and determine whether your hypothesis was right or not was fun—and of course, sometimes it was a total disaster! Occasionally, it didn’t work at all! … But you learned something from that experience. As George told me, ‘When you fall down you make sure you pick something up on your way back up.’ You make sure you understand what happened and learn something from it. ‘Oh, my design was wrong,’ or, ‘My hypothesis was not correct,’ or, ‘Something different is happening.’”

Together, they developed universal arrays to look for mutated DNA in tissue or blood samples for early detection of cancer. This work revolutionized the world of genome sequencing, reducing the time required from years to mere days, and is now the basis for all “next generation” DNA sequencing used in diagnostics and genetics.

At LSU, Hammer’s research focus became peptide and nucleic acid chemistry. Within a year, he’d won the LSU College of Basic Sciences Outstanding Teacher Award and soon started collaborating with his PhD advisor’s brother, Francis Barany, who had some ideas of ways to make arrays for nucleic acid applications, including DNA sequencing applications for detecting low-level amounts of mutations in samples from cancer patients. Working together, Hammer and the Barany brothers developed zip code chemistry and universal DNA arrays to look for single nucleotide polymorphisms (SNPs) and mutated DNA to detect low-level cancer mutations. This work helped revolutionize the world of genomics, and is now the basis for all “next generation” DNA sequencing used in diagnostics and genetics.

Hammer also worked with William Hansel [the late Gordon Cain Professor at LSU and researcher at Pennington Biomedical Research Center] on curcumin, which gives turmeric its yellow color and had been proposed to be both an anti-inflammatory and an anti-cancer agent.

“Formulating it as a drug was difficult, however, because curcumin is insoluble in everything,” Hammer says. “Bill had been working on using peptides to target drugs at certain tissues in the body, so we tried conjugating curcumin to an LHRH-peptide, which is very soluble in water, and this made the curcumin both soluble and targeted. Those discoveries led to patents I’m very proud of.”

“In biological chemistry, there are four major types of molecules that make up the cellular machinery, and they are proteins or peptides, nucleic acids, lipids, and polysaccharides,” Hammer explains. “[Professor in the LSU Departments of Chemistry and Biological Sciences] Roger Laine, who was inducted as an NAI fellow this past year, is working on sugars, while I work on peptides and nucleic acids. At LSU, my office was almost as messy as Roger’s.”

In 2003, the year after he became full professor and director of the LSU Peptide and Protein Facility, Hammer won the LSU Distinguished Faculty Award.

“As I started rising through the professorial ranks, something I learned is that once you develop a good-sized research group, your group would rather not have you in the lab. Students want to be independent, and that’s what you want, too,” Hammer remarked. “My role became to mentor and train them and help them train each other how to do the work necessary to test our hypotheses. Once I became full professor, I did almost no lab work while working with large amounts of lab data produced by my students. Of course, you want your students to be safe and give them good initial training, but it is difficult to get in the lab with all of the other responsibilities you have as a faculty member.”

“My induction is largely due to working with great colleagues; all of my patents are collaborative with either colleagues or students or my colleagues’ students. The only way I was able to get this NAI fellowship is by working with other highly talented and innovative people.”

In 2008, Hammer left LSU to work in industry on pharmaceutical research.

“Going from academia to industry was a cool transition for me because it allowed me to get back into the lab. I was able to spend about 50 percent of my time in the lab teaching and training others and doing cutting-edge research in the pharmaceutical and biotechnology sector.”

Hammer is currently Director of Technical Operations at Ra Pharmaceuticals in Cambridge, Massachusetts, developing peptides as investigational drugs. One drug candidate he helped discover, called zilucoplan, is now in a phase III clinical trial for a rare neuromuscular immune disease called myasthenia gravis, or MG. Zilucoplan is designed to be an inhibitor of the complement system, which is part of the innate immune system. The innate immune system is distinct from the adaptive immune system, which makes antibodies to foreign agents like viruses and bacteria. In humans, the complement system works in concert with the adaptive immune system, but sometimes it reacts when it shouldn’t, leading to pathologies like autoimmune disorders.

“By inhibiting the complement system, we can prevent it from attacking healthy cells and tissues when it doesn’t need to,” Hammer explains. “This can reduce the severity of a disease like MG, which causes weakness in your muscles—typically the face and neck, but it can be generalized. MG can be fatal if it attacks the muscles that control breathing.”

Hammer is hopeful that, if approved, zilucoplan will be an effective therapy for patients with a wide range of complement-based diseases for which there are limited therapies or only ones that are extremely expensive and therefore not available to all patients.

Regarding his NAI fellowship, Hammer makes a point of sharing the honor with many of his former colleagues and students at LSU as well as collaborators at other institutions.

“My induction is largely due to working with great colleagues; all of my patents are collaborative with either colleagues or students or my colleagues’ students,” Hammer concludes. “The only way I was able to get this NAI fellowship is by working with other highly talented and innovative people.”