LSU Professor Leads Citizen Scientists to Map COVID-19 Medical Trash around the World, One Neighborhood at a Time 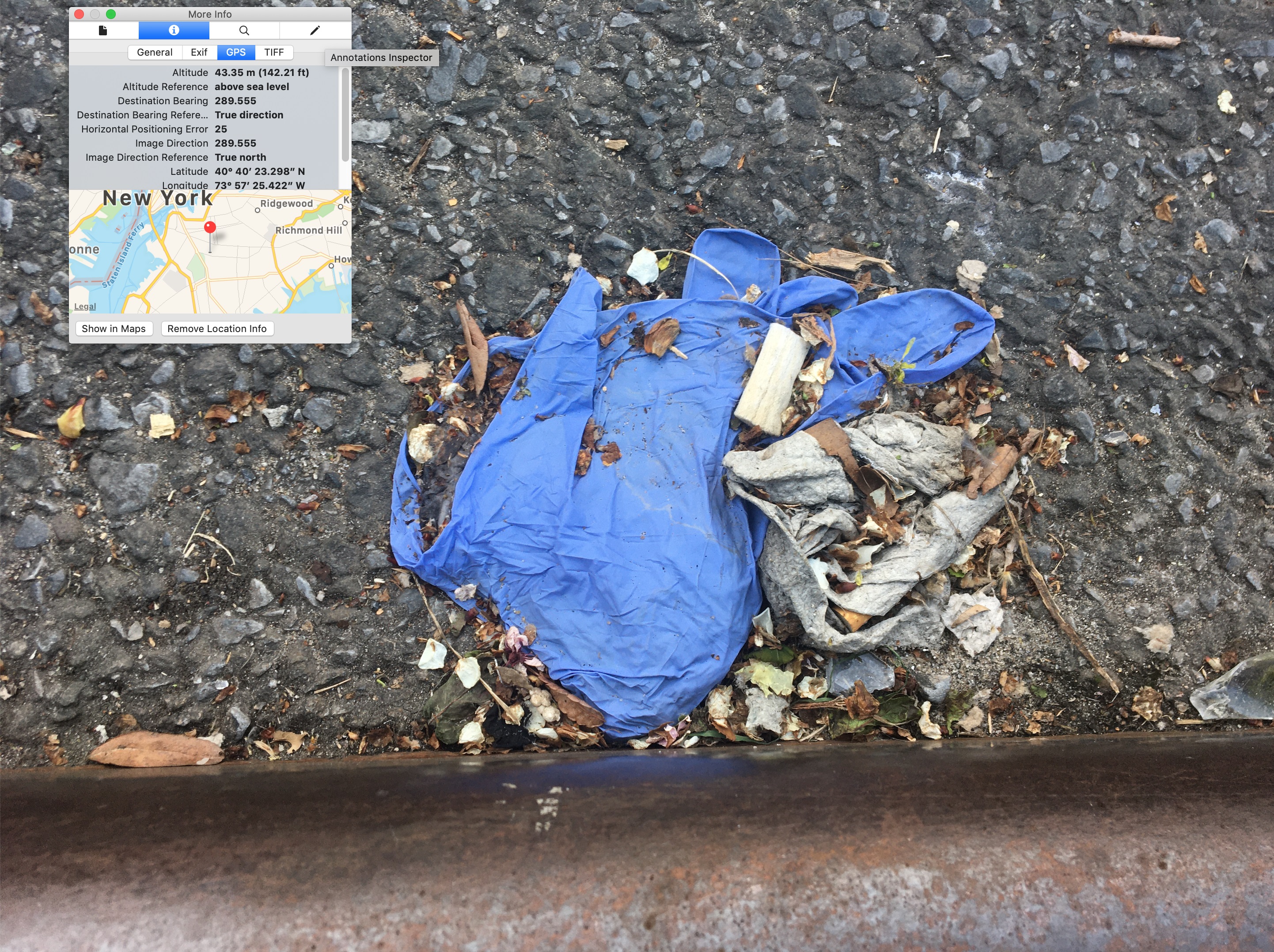 Disposable glove photographed and geo-tagged in New York by a participant in LSU Professor Mark Benfield's project to map the quantities and types of personal protective equipment, or PPE, trash littering neighborhoods around the world.
Photo Credit: LSU.

BATON ROUGE – On LSU Professor Mark Benfield’s frequent walks around his neighborhood, one thing has become increasingly clear – the amount of disposable synthetic rubber gloves littering the street. While most people would probably just continue to walk on by, Benfield decided to launch a global research project to map the amount and types of this new class of trash. He calls it waste PPE, or personal protective equipment, which includes disposable masks, gloves and disinfecting wipes, used prevalently since the COVID-19 pandemic. So far, he’s received nearly 2,000 images of this type of trash from citizen scientists and colleagues participating in this project from their neighborhoods around the world.

“This project enables me to dovetail authorized exercise with data collection. I’m logging about 33 miles of walking a week while collecting useful data and complying with public health safety guidelines,” said Benfield, who is a professor in the LSU Department of Oceanography & Coastal Sciences in the College of the Coast & Environment. 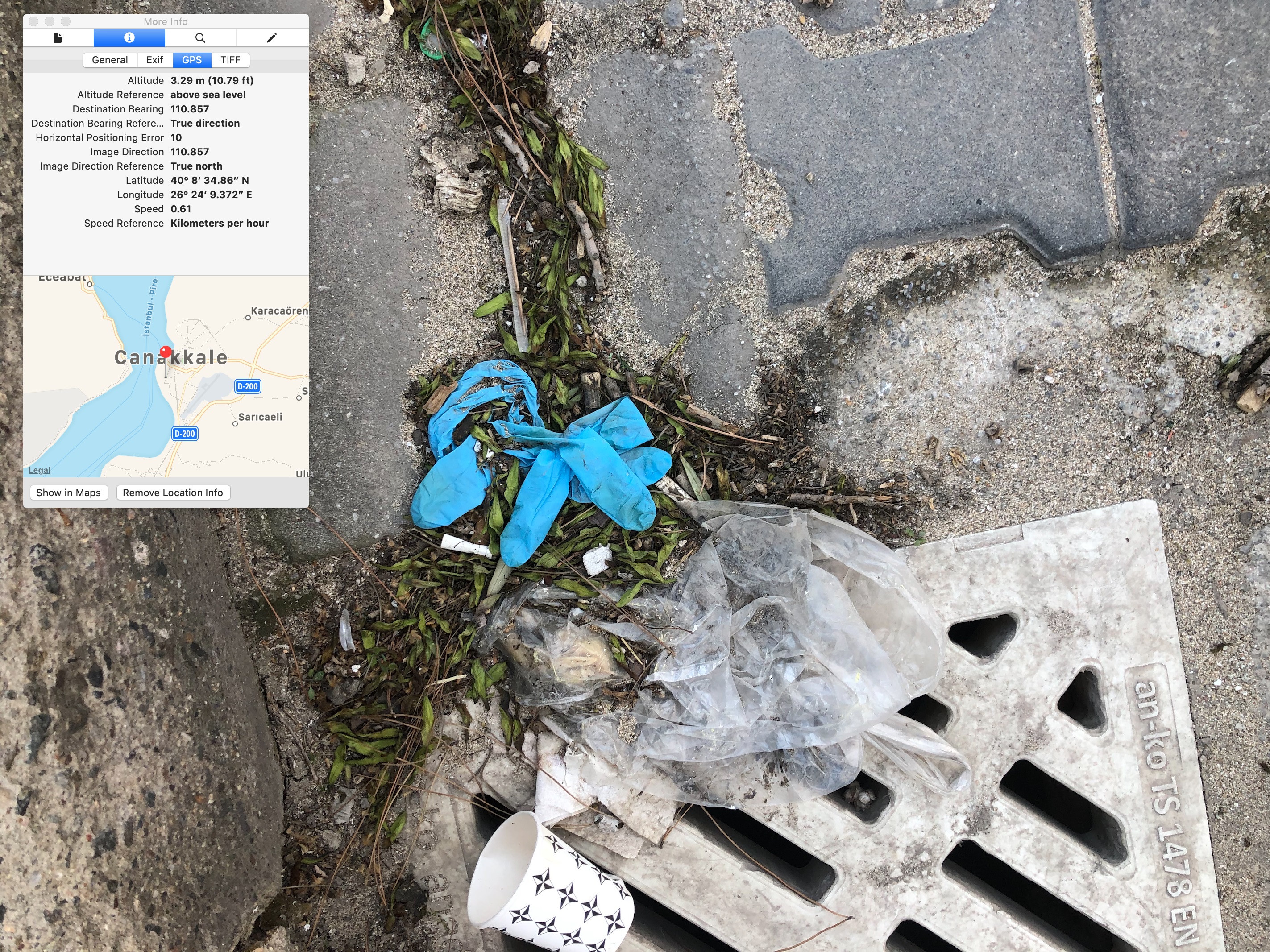 PPE trash by a drain documented in Turkey. Experts estimate that more than 9 million tons of plastic garbage ends up in the ocean each year.

The project’s data collection methodology is simple: use a fitness app to track your movements and take close-up geo-tagged images of each piece of PPE trash. So far, more than 1,400 images of this type of medical trash has been documented in New York City alone.

By surveying the same streets in a neighborhood repeatedly, Benfield can see if quantities of this type of litter are increasing or decreasing.

“Increases will allow us to estimate rates of accumulation. Decreases, particularly after rainfall events, may suggest losses to storm water systems and ultimately transport into rivers and the oceans,” he said.

Benfield’s research in recent years also has been mapping plastic trash in the environment. Specifically, he has been surveying and analyzing microplastics in the Mississippi River, the Gulf of Mexico and on barrier islands in Louisiana. His work using a drone to map plastic trash on barrier islands was recognized by the National Geographic Society last year when his team was selected as a finalist in the data visualization part of the Ocean Plastic Innovation Challenge. 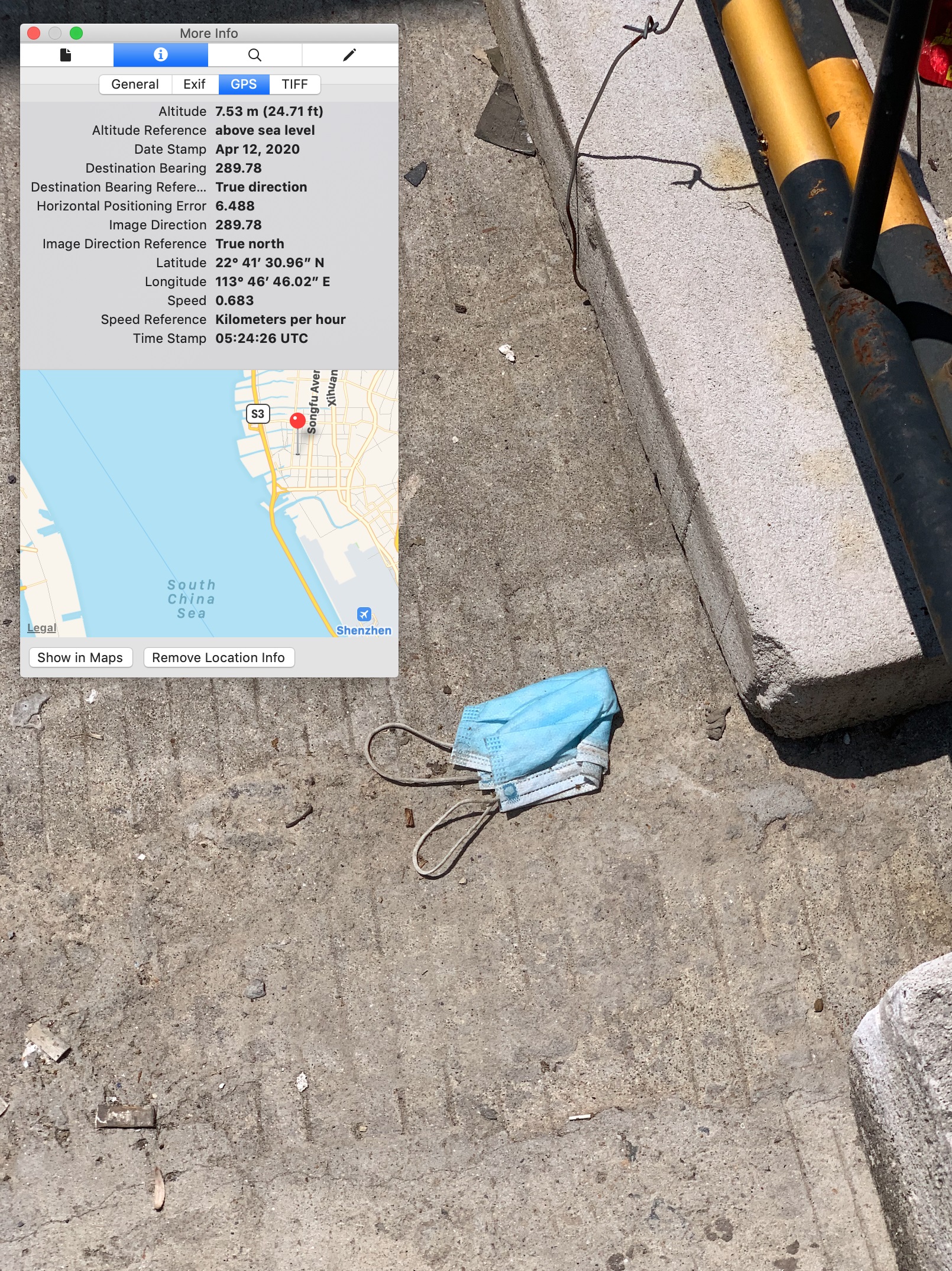 Disposable mask documented in China. In Shenzhen, China, PPE trash bins are common in public, which may be the reason why the quantities of PPE litter on the street seem less than in other countries.
Photo Credit: LSU.

“Most plastic garbage is destined for the oceans,” he said. “What’s most disturbing is that I’m already seeing waste PPE in our waste water canal here in Baton Rouge. In every city, we find them next to or near storm drains. They are one rainfall away from going to the sea.”

Experts estimate that more than 9 million tons of plastic garbage ends up in the ocean each year.

“If what we’re finding on the streets winds up in our water ways and then the ocean, we’re compounding an already frightening problem. If you think a sea turtle finds plastic shopping bags an attractive meal, wait until they find a plastic glove. I can’t imagine a more jellyfish-like piece of garbage,” he said.

The availability of waste bins in public can make a difference though. For example, in Shenzhen, China, the amount of PPE trash seems less, possibly because there are dedicated PPE disposal bins commonly found in public.

“Obviously people view these items as being contaminated with the virus. They don’t want them in their cars nor their pockets. In my neighborhood there are only two public trash cans, so rather than carry them around, I suspect people dump them,” Benfield said. “What has struck me is that I often find discarded items in surreptitious places. People seem to know that they shouldn’t throw them out into the environment, so they toss them in an area where they are not easily seen.”

So far, the quantities of medical trash found on the street is proportional to its availability in specific regions. For example, gloves and disinfecting wipes are more widely available than disposable masks in the U.S. and therefore comprise the majority of the medical litter documented through this project. However, disposable masks are more available, and prevalent as litter, in Turkey and China.

To help with this global effort and document the waste PPE in neighborhoods, email covid19waste@gmail.com.