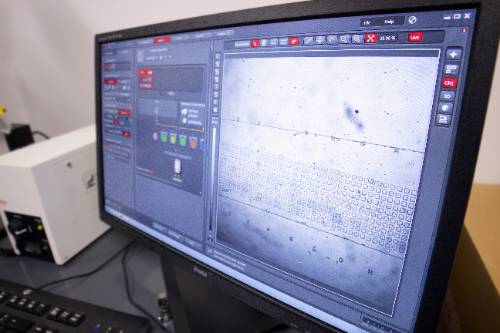 According to the American Cancer Society, two out of three breast cancer cases are hormone receptor-positive with 60-70 percent of those cases being ER+. Targeted therapies exist for ER+ breast cancer, however, nearly half of those patients will become resistant to endocrine therapy. Thanks to a $140,000 grant from the National Cancer Institute, two LSU professors and their students are researching what causes this resistance to treatment.

LSU Biological Engineering Assistant Professor Elizabeth Martin, who is the principal investigator on the NCI research project, says that while ER+ breast cancer is more likely to respond to endocrine therapy, 40 percent of ER+ patients become resistant to this treatment.

Endocrine therapy directly targets the estrogen receptor unlike chemotherapy, which can target proliferating cells in the body, including healthy cells.

“Either patients already had resistance to the endocrine treatment or acquired it over time,” Martin said. “Unfortunately, when there is resistance in the ER+ cells, it can be seen after the cancer cells have metastasized and moved on to another organ.”

LSU Chemical Engineering Associate Professor Adam Melvin, who serves as the co-PI on the project, says that they are not so much studying resistance at the primary site, but the journey from point A to point B as the cancer cell metastasizes or moves to another spot in the body.

“The hypothesis we have is that the cancer cells pick up mutations [so that they go] from being susceptible to endocrine therapy to being resistant,” he said. “How does it become resistant?”

One thing that could make them change, Melvin added, is fluid shear stress. This occurs as the cell moves through the vasculature, putting pressure on the cell. Prolonged exposure to this pressure can cause the cell to mutate, which can make it stronger. Melvin compares it to someone going down a waterslide where the fluid velocity of the water puts more pressure on the body.

“We think the fluid velocity pushing on that cell induces mutations, and we think that stressful environment on the cell is causing it to develop this resistance,” he said.

Martin says the ultimate goal of this research is to understand how to resensitize cancer cells to endocrine therapy so that patients don’t need to move to treatments like chemotherapy. 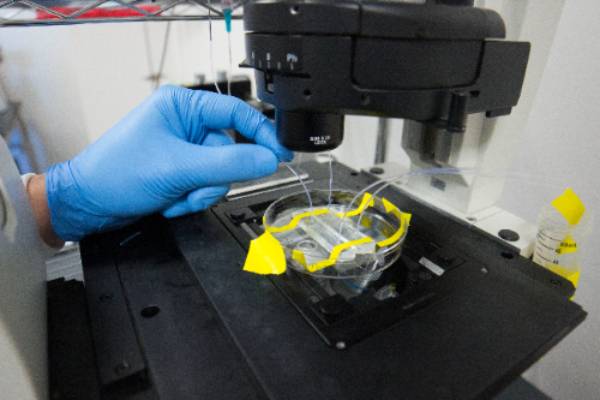 LSU ChE graduate student Braulio Ortega Quesada of San Pedro, Costa Rica, and LSU BE graduate student Jonathan Cuccia of Meraux, La., work under Melvin and Martin and are stressing out the ER+ cells on a micron-scale waterslide, as well as analyzing them in groups and individually at the end to see how the cells differ from one another.

They run the breast cancer cells through a microfluidic device that shears the cells and then traps them in an array that can hold up to 7,000 cells, which can be stained for changes in protein expression. While Quesada analyzes single cells, Cuccia looks at millions of cells at a time.

“The microfluidic device serves as a channel that imparts the same relative amounts of fluid shear stress that metastasizing cancer cells would experience in your vasculature,” Cuccia said. “We don’t actually know if the fluid shear stress causes the cells to mutate. That’s what we’re looking for. What’s different about cancer cells is that in the primary site, ER+ cancer can change and morph into ER- in a metastatic state. We don’t know exactly where along the metastatic cascade that occurs, so we’re investigating its journey through the blood vessels to see if that’s where the environmental stimuli caused by the shear stress activates them.”

Part of Quesada and Cuccia’s research entails taking photos of the cells under a microscope, which can be time-consuming in the lab. In order to help decrease the amount of time spent taking photos, Martin and Melvin have assigned a biological engineering senior design team to create an automated image-capturing system. The six-person team was divided into a hardware team led by LSU BE senior Morgan Doyle of Madisonville, La., and a software team led by LSU ChE senior Adam Langlois of Meraux, La. Other team members include Jacob Chaisson of Houma, La., Logan Brou of Port Allen, La., Alejandra Ham of Slidell, La., and Sarah Jimenez of Ponchatoula, La.

“We’re editing the microscope [so that it] can do automated image-capturing that will allow more time for the grad students to work on other aspects of the project,” Langlois said. “Right now, Braulio must take photos of the cell groups (3,000 total cells), which takes an hour. The objective for the automated system will take less time, but exactly how long is not known yet.”

“I’ve been doing breast cancer research in Dr. Martin’s lab for nearly two years, so for me, this is a really cool project, and it’s great knowing that what we’re doing is going to help the grad students progress their research at a faster pace,” Doyle said.

So far, Quesada and Cuccia are seeing positive results in their labs, which should give hope to the thousands of ER+ breast cancer patients who are unresponsive to endocrine therapy at metastatic sites.

“We’ve already seen some pretty promising things that have us excited,” Cuccia said. “We’re looking forward to where this goes in the future.”