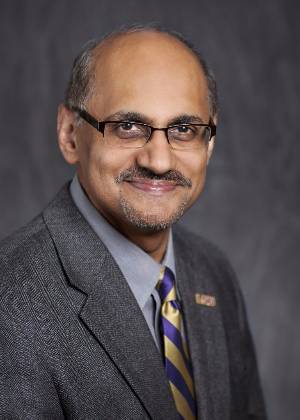 Valsaraj has been elected a Fellow of the Royal Society of Chemistry, which is headquartered in London. Individuals are eligible to become a Fellow if they’ve spent more than five years in a senior position and their efforts have made an impact in any field of the chemical sciences.

“I feel really honored to be selected a Fellow of the oldest chemical society in the world; RSC is celebrating its 175th anniversary,” Valsaraj said. “It is my scientific work in the areas of environmental fate and transport that I am most recognized for, and the recognition from RSC is also for that effort. To me, all my accomplishments are a result of not only my work, but also of all the students and postdocs who have worked with me over the years.”

Valsaraj earned his PhD from Vanderbilt University in 1983. His research areas include environmental chemical engineering, atmospheric chemistry and wastewater treatment. He holds two patents, has published more than 200 journal articles and recently served the university as vice president for research and economic development. He is also a fellow of the American Institute of Chemical Engineers, American Association for the Advancement of Science and the National Academy of Inventors.

About the Royal Society of Chemistry

The RSC has more than 54,000 members and is the United Kingdom’s professional body for chemical scientists. Its mission is to advance chemistry as a science and develop its applications, disseminate chemical knowledge, maintain professional qualifications, set high standards of competence and conduct for professional chemists, provide information and advice on issues involving the science and practice of chemistry at all levels, and to serve the public interest while remaining completely objective.