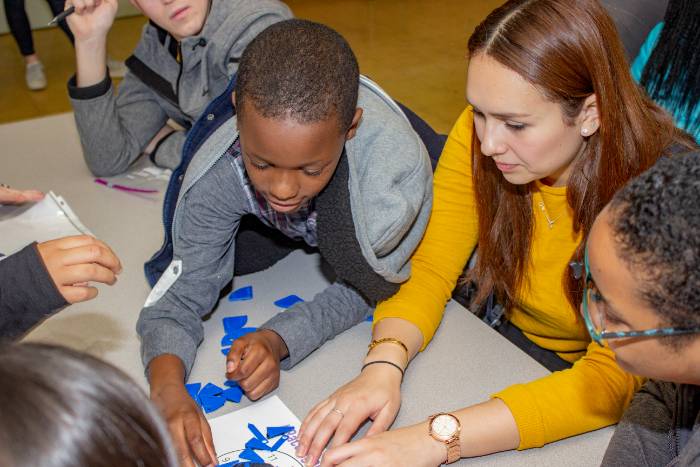 In their learning game called “Divvy It Up,” there are 18 small round chips on a tray. By making six rows of three chips, McMahon is trying to illustrate what 18 divided by three looks like. Staring down at the tray, a young girl analyzes the chips, then moves them around on her own.

“We’re hoping by building the foundation and giving them a visual representation of what it’s supposed to mean, they get better when the numbers get more complex,” McMahon said.

“Divvy It Up” is just one game of many that LSU BE students are teaching Highland Elementary students as part of a service-learning class taught by LSU Biological and Agricultural Engineering Instructor Nick Totaro and LSU BAE Professor Todd Monroe. The BE 1251 class, which was approved through LSU’s Center for Community Engagement, Learning, and Leadership (CCELL), aims to help first- through third-grade students learn math, as well as teach the engineering students 3D software and 3D printing. The class project is a collaboration between LSU, Highland Elementary and Volunteers in Public Schools (VIPS).

“VIPS has three programs,” said Taylor Blanchard, VIPS EveryOne Counts and Ready4K coordinator. “EveryBody Reads has volunteers help pre-K to second-grade students with reading 30 minutes a week, while EveryOne Counts has volunteers help kindergarten to third-grade students with math for 30 minutes a week. Partners in Education is where an organization or community group might not be able to commit weekly but still want to have a day of service. So, they’ll partner with schools to find out what they need. This collaboration with Nick’s class and Highland Elementary is part of our Partners in Education program.”

Totaro and Monroe’s BE 1251 class is comprised of about 120 students who are divided into three sections of 40 students, with each section designing for a different grade.

“I have three sections, so it worked out really well to have my section one class be here for the first-graders, section two for the second-graders, and section three for the third-graders,” Totaro said. “Next year, when we have four sections, I’ll probably have students work with kindergarteners.”

Each section then divides into 10 groups of four to five students to design a math-learning tool in computer-aided drafting (CAD) that is then 3D-printed to teach their group of four to five elementary students.

“Highland Elementary Principal Justin Robicheaux sent us his math-targeted areas from kindergarten to third grade, and we took the second half of the grade below and what they should be covering the first half of the year for each grade,” Totaro said. “This way, when we present to the students at the end of the fall, it’s on content they should already know by now, but may need to work on.”

“We spent almost the entire semester learning how to use the 3D software to be able to print in the Chevron Center for Engineering Education,” Totaro said. “Boz [Bowles, assistant director of the Chevron Center] has been excellent.”

After learning how to use the software, the BE students went to Highland Elementary to meet with the students of their target grade level. They also saw what was in the Math Boxes, normally used by VIPS volunteers, in order to get ideas for their own projects. Then, in just one month, the BE students designed their own games.

“It took three to four hours to come up with general concepts, then maybe a couple of hours to fine-tune it,” Bankston said. “Coming up with animations and drawing it using 3D software took many, many hours. It took seven hours just for the game board to print using SLA [stereolithography apparatus] printing.”

“There are quicker printers, but we chose this one so our tool would have a smooth surface where the chips could slide,” McMahon said.

The idea for the collaboration between LSU, VIPS and Highland Elementary came from Totaro, who has been a VIPS Math Friend since 2012, though he began volunteering with VIPS as part of EveryBody Reads in 2009.

“Since I’ve known Nick as a Math Friend, he’s been very dedicated with his volunteer work,” Blanchard said. “He’s really engaging with students and always finds ways to make the math interesting for them. He’s full of ideas.”

“Math Friends provides a Math Box with educational tools for volunteers to use in teaching,” Totaro said. “That’s where I got this idea to do a service-learning project of taking something that we learned in the classroom and bringing it to the community. So, I partnered with Taylor of VIPS and Highland Elementary Principal Justin Robicheaux and asked if we could make the math games to cover what they’re learning in grades one through three.”

“There was no doubt that this project was going to be a win-win for the students at Highland Elementary, as well as for the LSU Engineering students,” Robicheaux said. “We love the partnership our school has had with the university, and this is just another example of that relationship.”

As for seeing results, Robicheaux said, “This project has had a profound effect on the students and teachers on our campus. The students raved about the exciting games, and the teachers learned of new ways to help students understand the math standards at their grade level.”

“The kids are so excited about this,” Highland Elementary Third-Grade Math Teacher Tessa Moseley said. “This program is really cool.”

When the service-learning project is complete, the math-learning tools will go to VIPS, who will then divide the tools between teachers who participated in the program and schools that participate in EveryOne Counts so their volunteers can use them.

As for Totaro, he plans on making this a yearly project that reaches out to more schools.

“The goal is to go to one school per year until we go through all of the schools in East Baton Rouge Parish,” he said.

Perhaps it’s a tall order, but it’s one that Totaro is determined to achieve.

“Whether you’re tutoring in math or reading, the biggest thing is consistency,” he said. “Show up for the student, talk to them, and get to know them.”