Ann Forte Trappey, born in Plaquemine, Louisiana, is presently CEO and President of Forte and Tablada, Inc, a consulting engineering and land surveying firm. Ann received her Bachelor of Science Degree in Civil Engineering from Louisiana State University in 1982. After graduation, Ann worked for eight years at the Louisiana Department of Transportation and Development in three departments: the Planning Section, the Computer Graphics Section and Road Design. In 1991, she began her employment at Forte and Tablada, Inc., as Chief Civil Engineer. As a design engineer, she oversaw major road, drainage and sewer improvement projects, new utilities and utility relocation projects, bridge and other structural projects for various local municipal and state government agencies. After assuming the role of Chief Executive Officer in January 1993, she continued her work as a design engineer along with the tasks of managing the firm. Ann’s experience in the planning and designing of infrastructure improvements has been extensive. Ann is a registered Professional Engineer in Civil Engineering both in Louisiana and Mississippi along with being a Registered Professional Engineer in Environmental Engineering in Louisiana.

Along with the time that Ann dedicates to professional service, she spends an enormous amount of time participating in community service. As a member of the Baton Rouge Rotary, from 1994 to present, she has served in the role of volunteer and chairperson on numerous committees. She has also been a member of the Baton Rouge Junior League since 1994 serving in many capacities. Ann has served on the Board of Directors for the Girl Scout Audubon Council during 1998, 1999, and 2001 to present. While on the board of the Council, she has assisted in developing a Strategic Plan for the Audubon Council and served as the 2002 Nominating Committee Chairman. Ann also commits her time to the YMCA, serving on the Metropolitan Board of Directors from 1998-present and serving as Board Vice-Chair for the 2003-2004 term. In her capacity with the YMCA, she has assisted in the development of the maintenance priority program for YMCA branches.

Her recent valuable assistance in making possible the acquisition of the LSU River Modeling Building, which houses a small scale physical model of the Mississippi River Delta, is a perfect example of the time, effort and funds she freely donates to projects that are of great value to the engineering profession, civil engineering in particular.

In 1995, Ann was honored by the Baton Rouge Business Report with the “Class of Top 40 Under 40 Award” for “stepping up the ladder of success, making a difference in their company, industry, profession and/or community.” Again in 1996, she was presented with the “Alumni Order of Omega Award” given to a fraternity alumni chosen from all Greek organizations here at LSU as a woman who has displayed “outstanding community service, service to her fraternity and service to LSU.”

Ann is married to Dr. Fred Trappey and has two children, Francois and Elise. She is a resident of Baton Rouge, Louisiana. 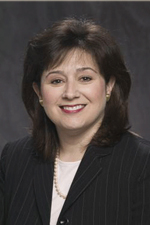