Dr. McManis received his Bachelor of Science degree in civil engineering from the University of Louisiana, Lafayette in 1963. He then went on to earn his Master of Science and his Ph.D. from Louisiana State University’s Civil and Environmental Engineering Department in 1966 and 1975.

Upon completion of his graduate research at LSU, he was awarded the Michael Claus Memorial Award for Outstanding Graduate Research.

After years of practice and teaching, Dr. McManis joined the University of New Orleans (UNO) as an Associate Professor. He was then selected as chairman of the Department of Civil and Environmental Engineering. He remained in this position for twenty-six years until his retirement as Professor Emeritus in 2004. He then accepted a position as professor and department head of the Civil Engineering Department at the University of Louisiana in Lafayette, Louisiana, which he presently serves.

In 2000, he was appointed to serve a six year term on the Louisiana Professional Engineering and Land Surveying Board by the Governor.

Dr. McManis continues to provide service to the Civil Engineering profession. His leadership and enthusiasm make him respected by all. 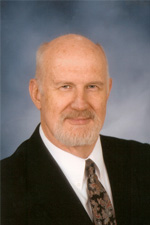