Dr. Rodolfo J. Aguilar is the Chairman and CEO of Pyburn & Odom MCA, LLC, one of the oldest and most reputable civil, mechanical and electrical engineering consulting firms in the state of Louisiana. His formal education includes an impressive five degrees. Aguilar's professional career spans over 50 years as a professor, engineer, architect, developer, banker, entrepreneur, investor and business owner. He has taught at six different universities in nine different fields, including Louisiana State University.

Aguilar’s educational background is extensive and quite diverse, including five degrees. Aguilar earned a B.S. in Architectural Engineering, a Bachelor of Architecture, and an M.S. in Civil Engineering from Louisiana State University; a Master of Business Administration from Tulane University; and the Ph.D. in Civil Engineering (Structures) from North Carolina State University, where he was a Ford Foundation Fellow. Aguilar was a National Science Foundation Fellow at the Illinois Institute of Technology (1962) and at the University of Michigan (1965). Aguilar joined LSU as an Assistant Professor of Civil Engineering in 1964. He was promoted to Associate Professor in 1966 and to Full Professor in 1969. Until 1985 he taught courses in civil engineering, construction, architecture and finance. During his tenure at LSU he served as director of the Center for Latin American Affairs, 1982-1985. His contribution to academia also includes service as Professor of Practice of Real Estate Finance, and Entrepreneurial Management in the A.B. Freeman School of Business at Tulane University from 1989 to present.

Aguilar has published two textbooks and over sixty technical articles and monographs. He has engaged in a wide range of professional activities, and has received many professional and civic awards, including the Halliburton Award for Excellence in Teaching (1967), and the Louisiana Engineering Society's Award of Merit as Louisiana's Most Promising Engineer (1972). He has held several directorships and board positions in banking and business, and has contributed to the community in many endeavors. Aguilar has been the architect and structural engineer of record and the developer of a variety of real estate projects, ranging from multi-family housing to condominiums, hotels (Baton Rouge Hilton Hotel), shopping centers, and office and medical buildings, with an aggregate value much in excess of $100 million. He has served as Chairman of the Board of Community Bank of LaFourche (1974-1977); Chairman of the Executive Committee of the Board of American Bank of Houma (1974-1977); Chairman of the Architect Selection Board for the State of Louisiana (1975-1976); member of the Louisiana Board of Commerce and Industry (1970-1980); Chairman of the State Job Training Coordinating Council (1984-1988); member of the Board of the Mental Health Association of Greater Baton Rouge (1976-1982); member of the Board of Trustees of Parkland Hospital (1986-1987); President of the Tulane Alumni Association, Baton Rouge Chapter (1996-1998); Chairman of the Chapter Cities Committee of the Tulane Alumni Association (1998).

Aguilar’s experiences as Chief Executive Officer of several engineering, architectural, and entrepreneurial companies; his participation in the banking industry, and on other boards; and his continued interest as a business professor have brought to Pyburn & Odom MCA the leadership to amplify and surpass Pyburn & Odom MCA’s half century of engineering excellence.

Aguilar's family, six sons, two daughters and, soon to be, thirteen grandchildren, have become integral members of the Baton Rouge and New Orleans communities. His extensive family includes attorneys, and business men and women. His wife, Marilyn, and four children are LSU graduates. 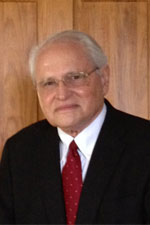