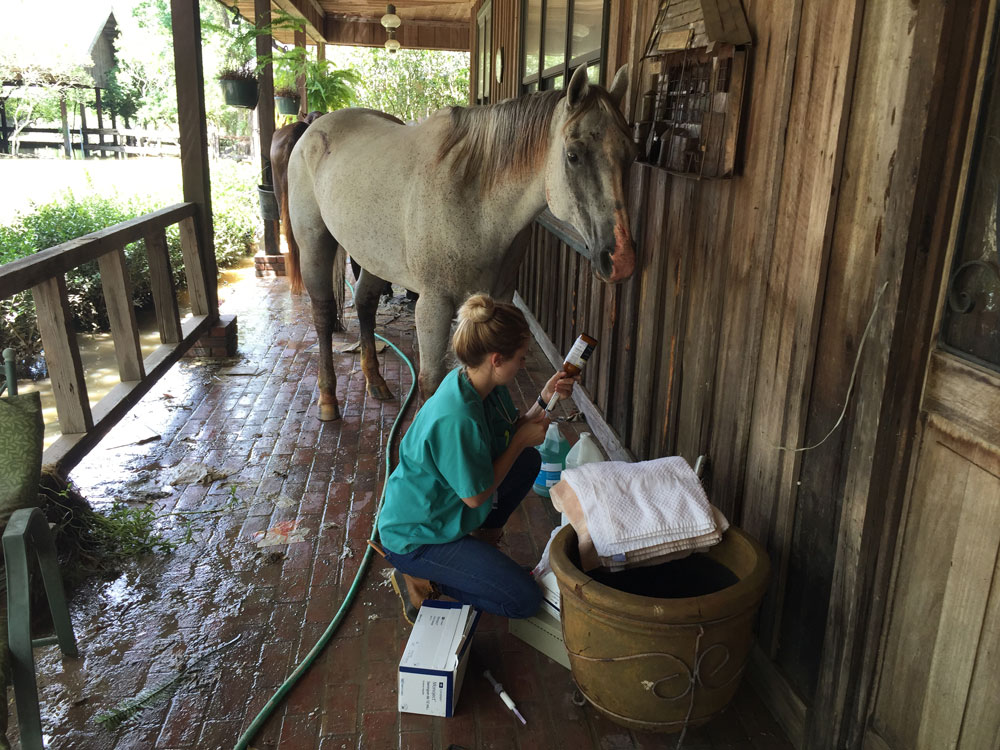 BATON ROUGE, LA – The LSU School of Veterinary Medicine (LSU SVM) and the Louisiana State Animal Response Team (LSART) are working together to rescue and care for animals affected by the historic flooding in south Louisiana.

On Saturday, August 12, volunteers with the LSU SVM and LSART began organizing rescues and animal shelters. The shelters are located at the Baton Rouge River Center and Celtic Studios in Baton Rouge, La., and at the Lamar-Dixon Expo Center in Gonzales, La. Since the shelters opened, 118 animals have been housed at Celtic (85 dogs and 33 cats); 1,333 animals have been housed at Lamar-Dixon (372 dogs, 109 cats, 142 cattle, 371 horses, 148 goats, 3 donkeys, 7 mules, 9 chickens, 2 guinea hens, 20 birds and 2 guinea pigs); and 120 animals have been housed at the River Center (85 dogs, 33 cats, 1 bird and 1 turtle). The animals in these shelters are being cared for by volunteers, many of them LSU SVM faculty, staff and students, including students in the Class of 2020, who did not begin their first-year orientation until August 17.

Countless volunteers composed of LSU SVM faculty, staff and students, as well as members of the public, have stepped up to rescue and care for these animals. The LSU SVM/LSART teams have rescued horses, dogs, cats, pigs, cattle, rabbits and chicken from flooded areas in Livingston and East Baton Rouge Parishes.

Some animals are being cared for at the LSU SVM Veterinary Teaching Hospital (VTH), which is always open 24/7 for emergencies and remained so during the flooding. Many of the LSU SVM faculty, staff and students were impacted by the flooding, but the VTH was able to remain staffed and is seeing regular appointments again, as well as animals affected by the flooding. Classes began on Wednesday, August 17 for veterinary students.

As the waters recede, the needs of people and animals affected by the flooding remain. If you would like to know how you can help, or if you need information related to how the flooding has affected animals, please go to www.lsu.edu/vetmed/disaster_preparedness/flooding.php.

The LSART/LSU SVM disaster response team is dedicated to being available to provide needed aid during a disaster, and continue to use these opportunities as a teaching tool for present and future veterinarians and other animal care personnel. Hurricanes Ivan, Katrina, Rita, Gustav, Ike and Isaac; the 2010 Gulf Oil Spill; the Mississippi River flooding in Tennessee (May 2011) and smaller scale rescues, including vehicular accidents and flood rescues, make up the list of responses since the group was formalized in 2005.

The LSU School of Veterinary Medicine is one of only 30 veterinary schools in the U.S. and the only one in Louisiana. The LSU SVM is dedicated to improving the lives of people and animals through education, research and service. We teach. We heal. We discover. We protect. 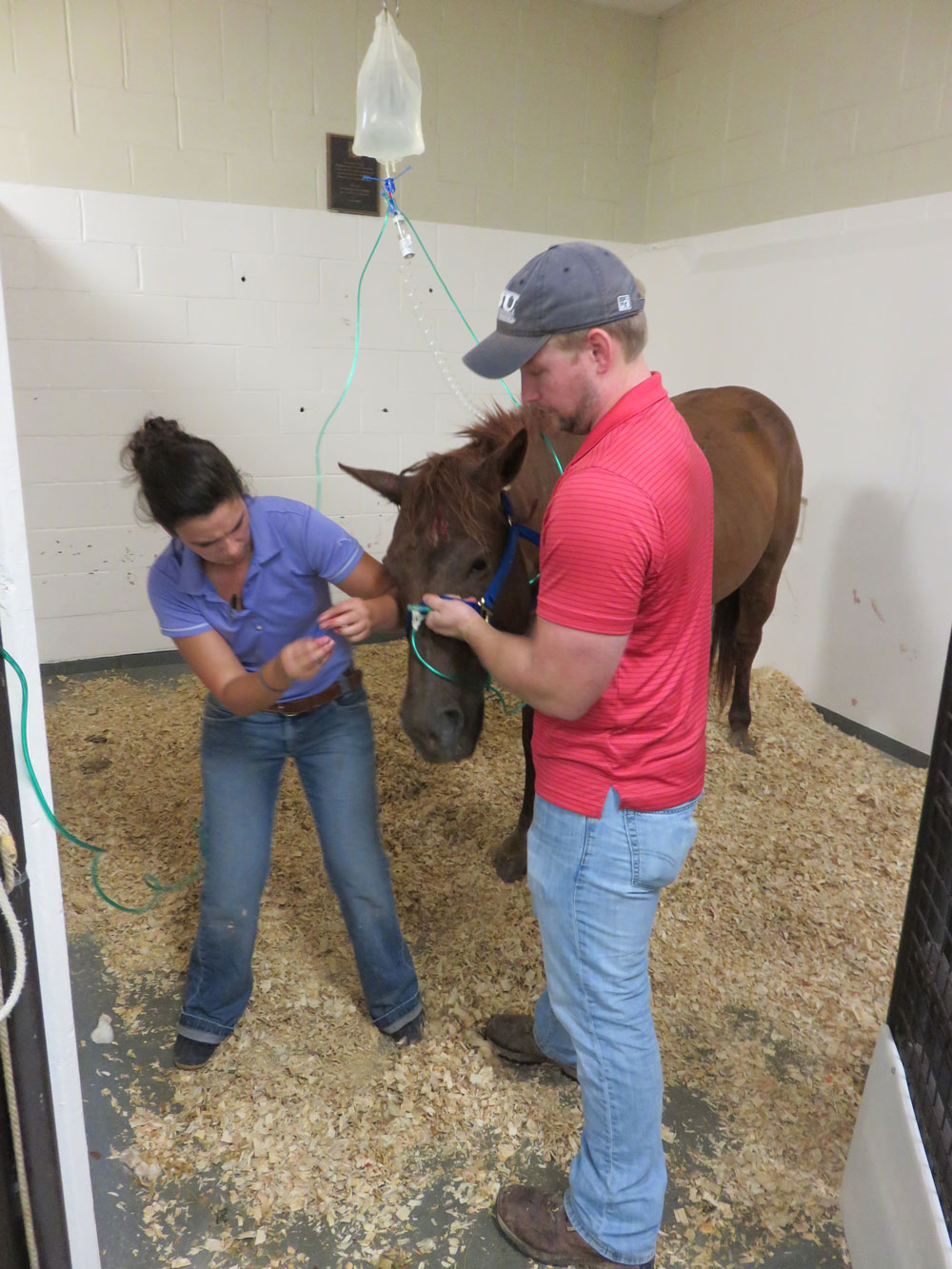 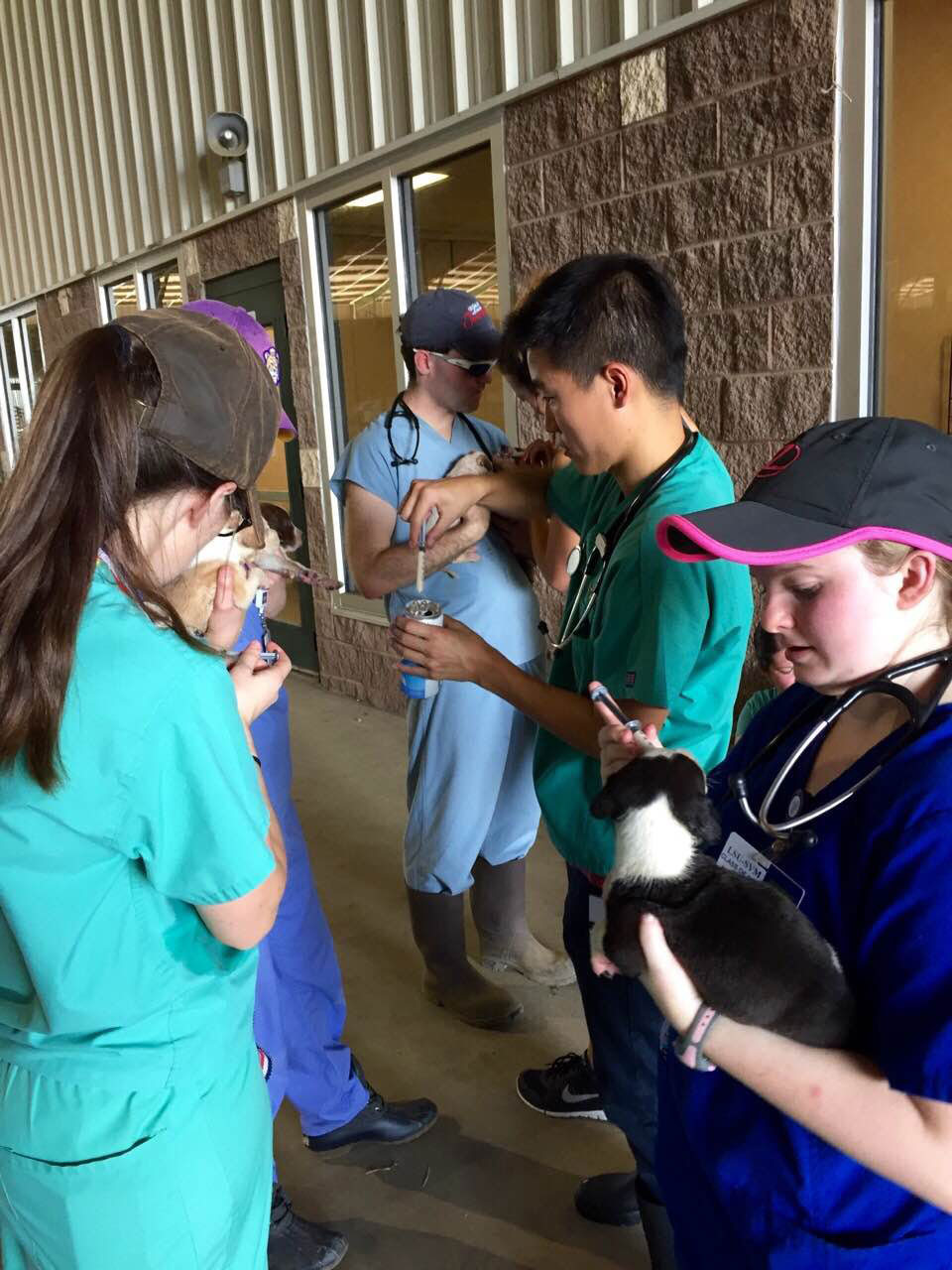 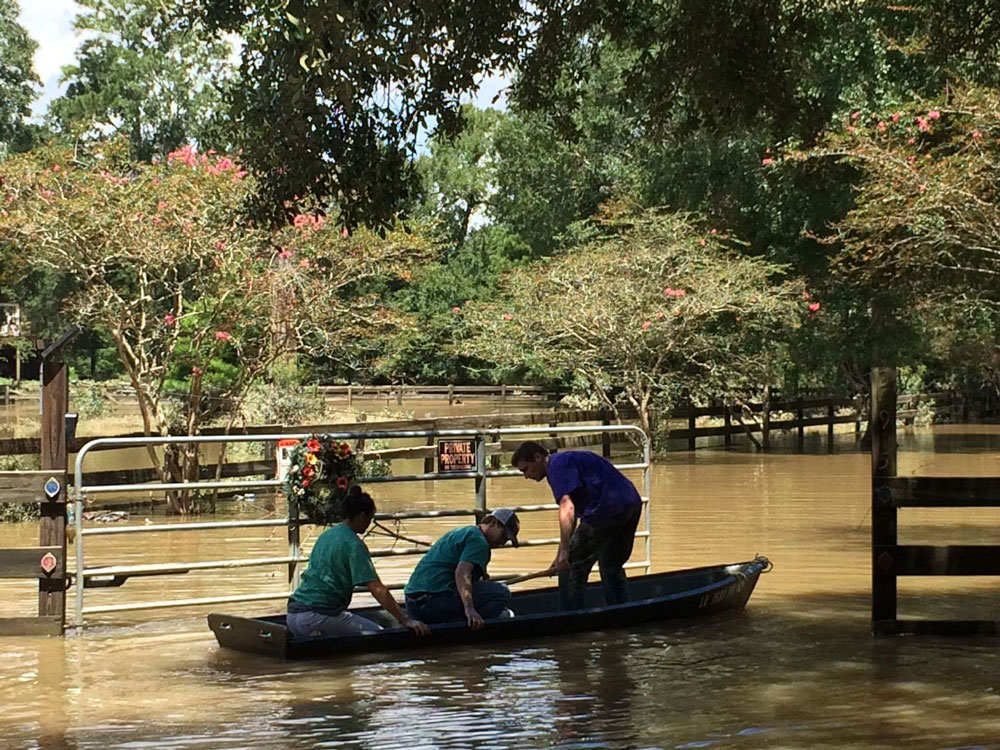 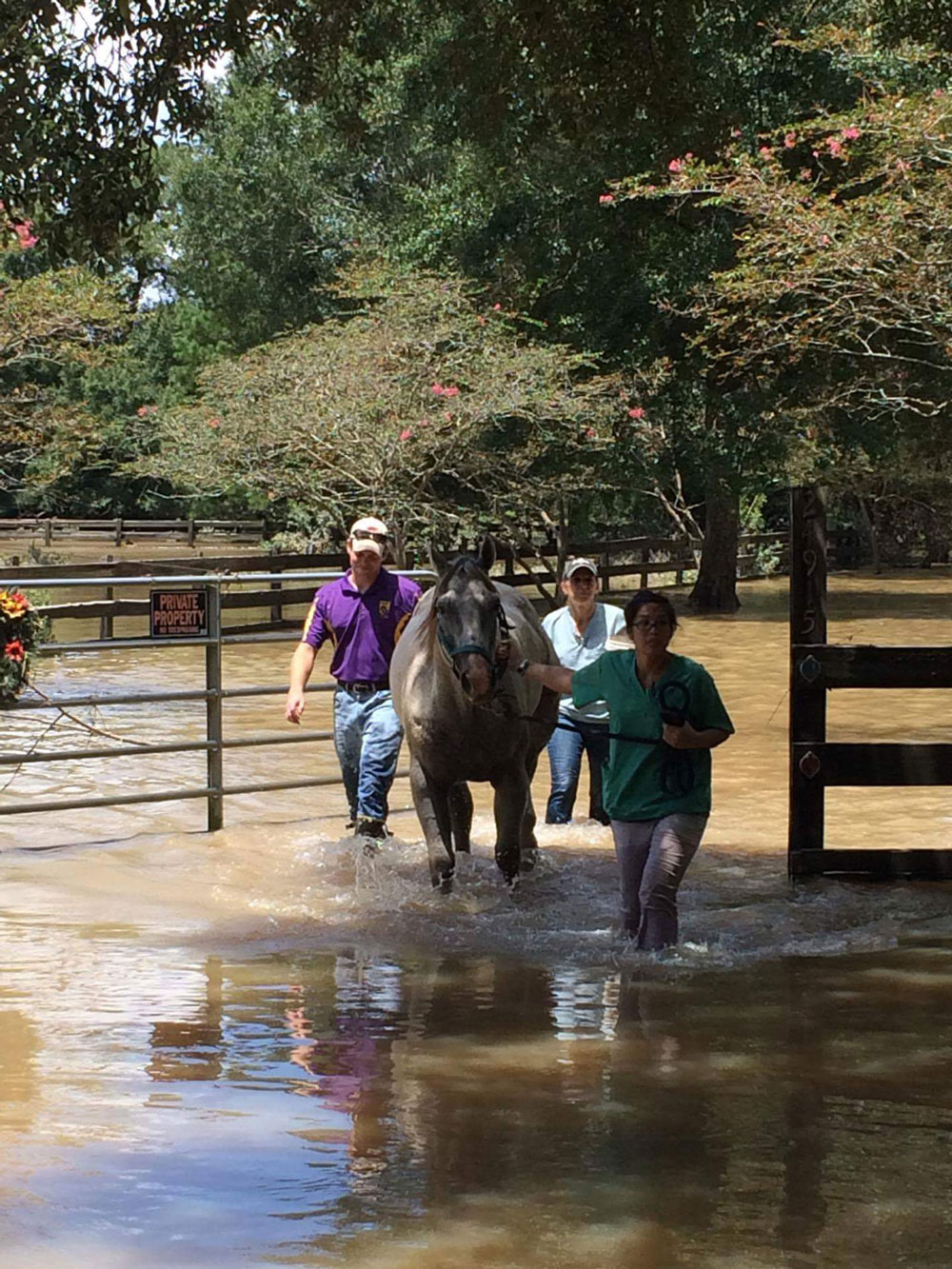 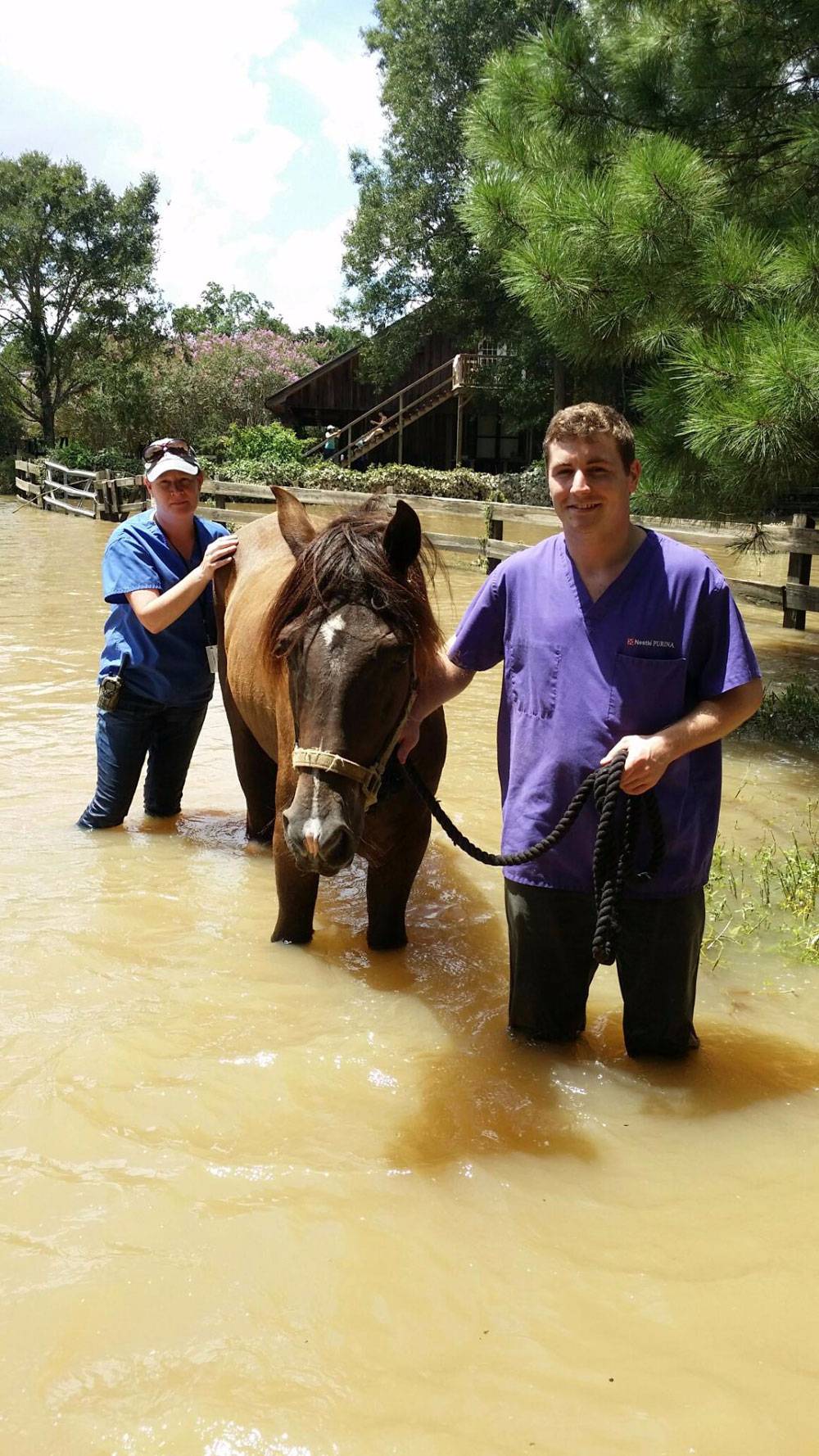 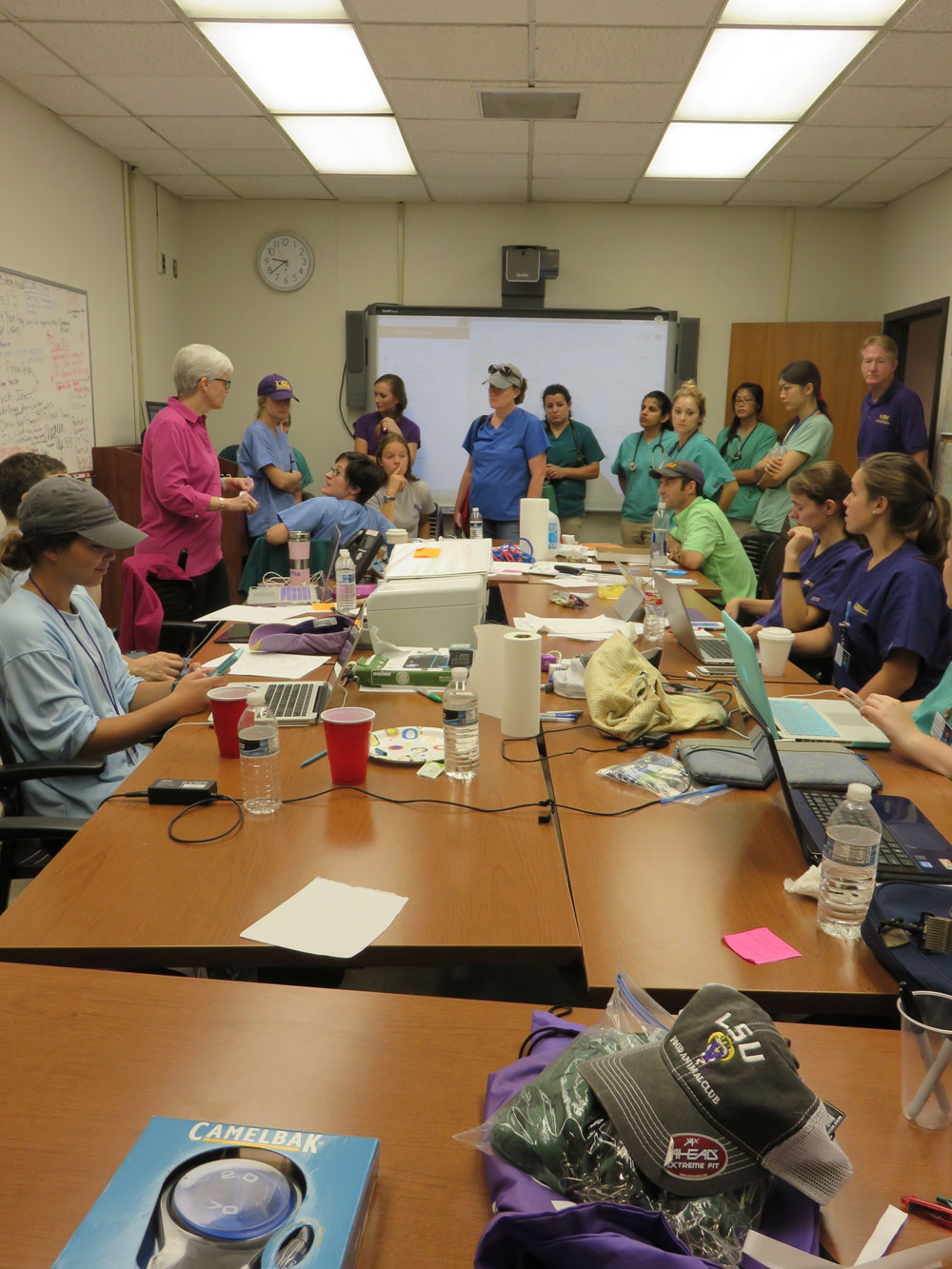