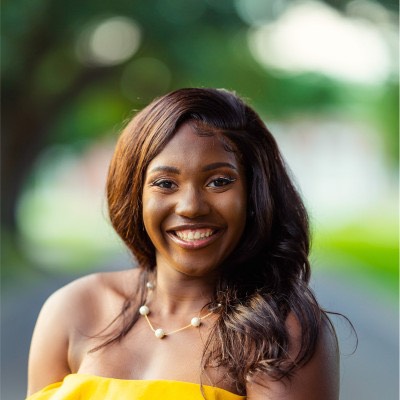 Ms. Daria Bentley, former Scholar of the Louis Stokes Louisiana Alliance for Minority Participation (LS-LAMP) and the Timbuktu Academy at Southern University at Baton Rouge (SUBR), earned the Bachelor of Science (BS) degree in Mechanical Engineering in the spring of 2020. During commencement, this Ohio native was distinguished as the College of Sciences and Engineering (CSE) Student Marshal for earning at 3.74/4.0 GPA, with Magna Cum Laude honors. In addition to LAMP and the Academy, she was a Scholar of the D. M. R. Spikes Honors College.  While at SUBR, Daria served as a peer tutor/mentor, an advocate for assisting those in need, as well as an active member of the Beta Psi Chapter of the Alpha Kappa Alpha Sorority, Inc.

Daria is currently pursuing a Ph.D. in Mechanical Engineering at The Ohio State University.  Recently, she was awarded a GEM [Graduate Education for Minorities] Fellowship for the 2021 cycle.  The National GEM Consortium, which consists of government laboratories, leading corporations, prominent universities, and outstanding research institutions, supports qualified minority students during their pursuit of a graduate education in applied science and engineering. SUBR is a participating GEM Member University in the consortium.

As an undergraduate, Daria was immersed in the Ten-Strand Systemic Mentoring Model of the Timbuktu Academy and LS-LAMP.  Her experiential research training includes outstanding performances during four (4) distinct internships - (1) Research Experience for Undergraduates (REU) program in the National Science Foundation (NSF) CREST for Multifunctional Composites in the Mechanical Engineering Department at SUBR (Fall 2018); (2) REU program in the Biomedical Engineering Department at the University of Texas-Austin (Summer 2017); (3) Structural Engineering internship with Boeing Aircraft in Everett, WA (Summer 2018); and (4) Materials Processing Engineering Internship with Boeing in Huntsville, AL (Summer 2019).  Under the direct supervision of Dr. Samuel Ibekwe, Mechanical Engineering Professor and LS-LAMP Departmental Mentoring Coordinator at SUBR, Daria completed and defended her Honor’s thesis entitled “Design and Analysis of an Optimal Low-Cost Suspension System for the First Southern University FSAE Motor Vehicle.”  She was a member of the Senior Design Team that participated in the Bell/Textron Challenge during the 2020 Black Engineer of the Year Awards (BEYA) STEM Global Competitiveness Conference in Washington, D.C.  Their creativity and assiduity resulted in the receipt of a financial award to support the design of the Formula SAE race car project.

Dr. Patrick Mensah, Formosa Endowed Professor and Associate Dean for Research and Graduate Programs in the College of Science and Engineering at SUBR, serves as Principal Investigator of LS-LAMP.  Professor of Physics and SUBR-LAMP Departmental Mentoring Coordinator for Physics Dr. Terrence Reese is the Director of the Timbuktu Academy at SUBR.  The central focus of these undergraduate mentoring programs is to increase the number and quality of minority students earning BS degrees in science, technology, engineering, and mathematics (STEM) disciplines and to guide an increasing proportion of these alumni to the successful pursuit of graduate STEM degrees, with an emphasis on the Ph.D.