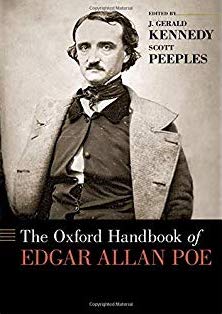 02/28/2019
BATON ROUGE – LSU’s J. Gerald Kennedy, Boyd Professor in the Department of English and expert on all things Edgar Allan Poe-related, is the co-editor of a new book containing the most important essays ever produced on the famous poet. “The Oxford Handbook of Edgar Allan Poe” is more than 800 pages long and contains 45 chapters on one of history’s most famous melancholy poets.

Kennedy taught classes on Poe and American literature at LSU from 1973 until his retirement in 2015. He edited the book with College of Charleston Professor Scott Peeples, who received his Ph.D. at LSU in 1993. They received assistance from current LSU Ph.D. student Caleb Doan. Two other university faculty – Jacob Berman and Lauren Coats – also contributed to the book with their own essays.

Through a collection of essays by 45 distinguished scholars, the book explores Poe’s troubled life and career, his poetry, and his lasting impact on literature and art. Kennedy said he and Peeples reached out to other scholars who were experts the poet too create an authoritative account of Poe’s life and legacy.

“Poe continues to fascinate scholars and critics because, unlike the work of many other 19th century authors, his tales and poem still haunt readers with their intensity and relevance to culture,” Kennedy said. “Poe anticipated the violence, madness, alienation and terror of the modern world.”