James Mickler, a native of New Orleans, is the fifth recipient of the Sean O’Keefe Leadership Award since it was established in 2015 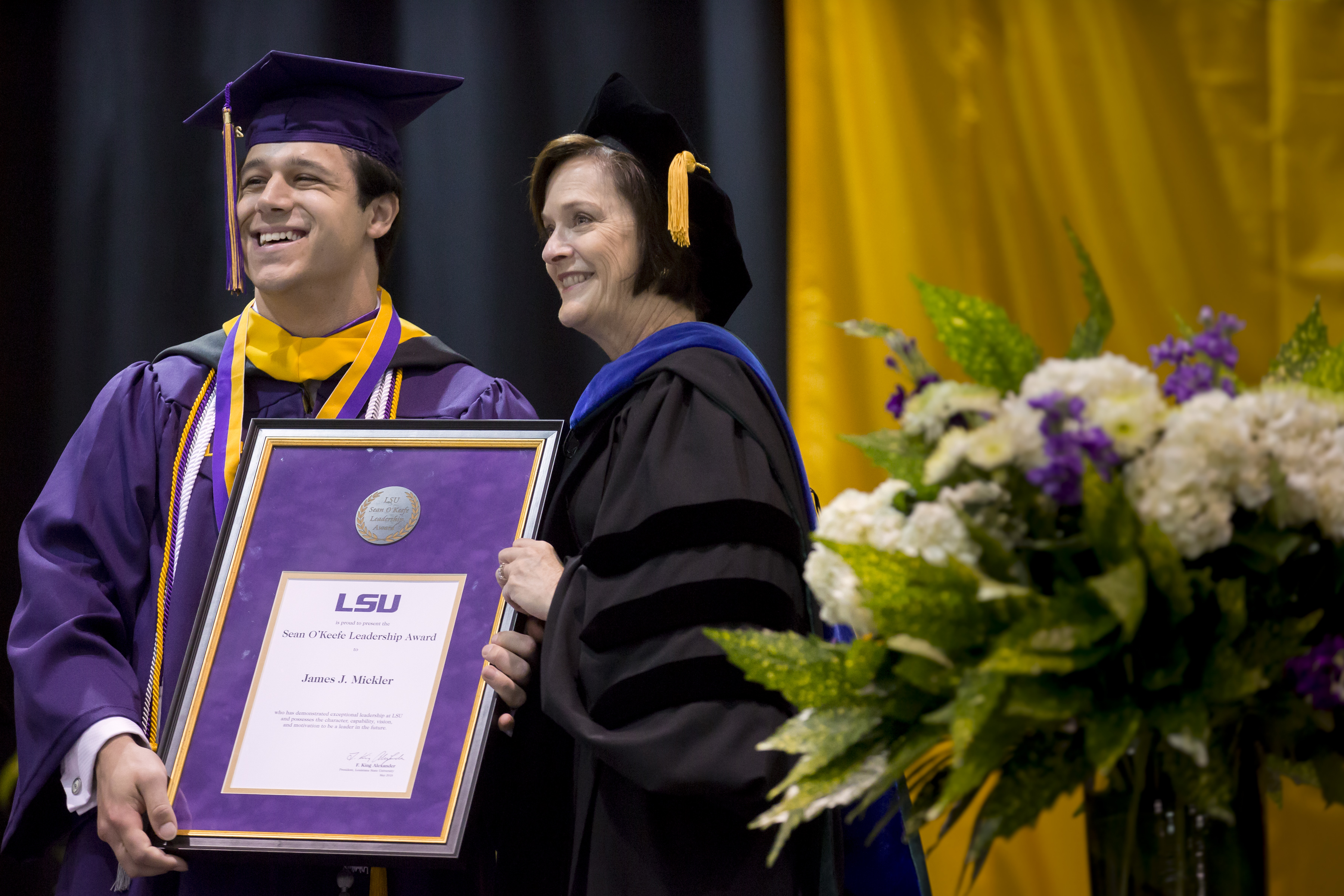 05/11/2018
BATON ROUGE – During the College of Science graduation ceremony on Friday, May 11, the Sean O’Keefe Leadership Award was presented to James Mickler, a microbiology major with a minor in classical guitar from New Orleans, La.

“We are pleased to honor James Mickler for the leadership he has shown in the classroom, in the lab, among his peers in his fraternity and in Student Government, and out in the local community,” said LSU President F. King Alexander. “The consistency in which he demonstrates this admirable trait throughout every corner of his life is why he is the Sean O’Keefe Leadership Award recipient this year.”

The Sean O’Keefe Leadership Award was created by LSU donors who recognized the leadership in former LSU Chancellor Sean O’Keefe during the aftermath of Hurricane Katrina. The award is designed to recognize and reward the outstanding LSU undergraduate student leader who has demonstrated exceptional leadership in the past and possesses the character, capability, vision and motivation to be a leader in the future.

The Sean O’Keefe Leadership award is an annual award of $10,000 to be used at the discretion of the recipient. The nominees were selected from the elected presidential posts from various student leadership positions. Criteria for the award also included a cumulative grade point average of at least a 2.75.

Nominees submitted two essays – a biographical summary of their leadership positions with any relevant activities in their life since high school graduation and an essay on the subject, “My Leadership Philosophy,” which articulates the nominee’s leadership principles and how the candidate has tried to live up to those ideals.

While at LSU, Mickler served in a number of leadership roles, most notably Student Government speaker of the senate and secretary of Phi Gamma Delta fraternity. He also spent more than 1,500 hours in the Moroney Laboratory researching a way to prevent an impending global food shortage through the President’s Future Leaders in Research scholarship. His project, organized and funded by the Bill and Melinda Gates Foundation, aimed at making crop plants grow faster. He was the lead researcher on the project and led four undergraduate assistants, while working with postdoctoral researchers from LSU, Australia National University, and other institutions.

In addition to his leadership efforts and research, Mickler volunteered his time with Baton Rouge General’s Arts in Medicine program and participated in a medical mission trip to Costa Rica.

A five-member selection panel made up of members of the business and LSU communities conducted personal interviews with each nominee to get to know them better and learn more about each nominee’s past and future leadership experience.

About Sean O’Keefe
O’Keefe is a longtime public administrator, national security expert and aerospace industry executive who has served in several top leadership positions in the U.S. government, higher education and industry.

O’Keefe is the former chairman of the board and chief executive officer of Airbus Group Inc. Immediately prior to joining Airbus, O’Keefe served as a vice president of the General Electric Company, following his service as chancellor of LSU.

O’Keefe has been credited for establishing the university’s first campus-wide fundraising campaign “Forever LSU Campaign,” raising $798 million. He became popular among students for interacting with them, especially during periodic “Chats with the Chancellor” across the campus throughout the semesters and because of his encouraging emails.

O’Keefe led LSU during its response to Hurricane Katrina in August and September 2005, when the campus was transformed into what has been called “the largest acute-care field hospital established in a contingency in the nation’s history.”

On four separate occasions, O’Keefe served as a presidential appointee. Prior to leading LSU, he was administrator of NASA. Earlier, he was deputy assistant to the president and deputy director of the Office of Management and Budget at the White House. He also served as secretary of the Navy, following service as comptroller and CFO of the Defense Department.

O’Keefe began his career after graduate studies at the Maxwell School of Syracuse University as a member of the inaugural class of the Presidential Management Fellowship program, and later joined the U.S. Senate Appropriations Committee staff. Between public service appointments, O’Keefe has held faculty posts at LSU, Penn State University and the Maxwell School, where he served as director of the National Security Studies Program and as Louis A. Bantle Chair of Business and Government.

In 1993, President Bush and Secretary Cheney presented O’Keefe with the Distinguished Public Service Award. He was the 1999 faculty recipient of the Syracuse University Chancellor’s Award for Public Service; recipient of the Department of Navy’s Public Service Award in December 2000 and has been awarded honorary doctorate degrees from several prestigious educational institutions. In March 2003 and 2004, he was recognized and honored by Irish America Magazine as one of the Top 100 Irish Americans.