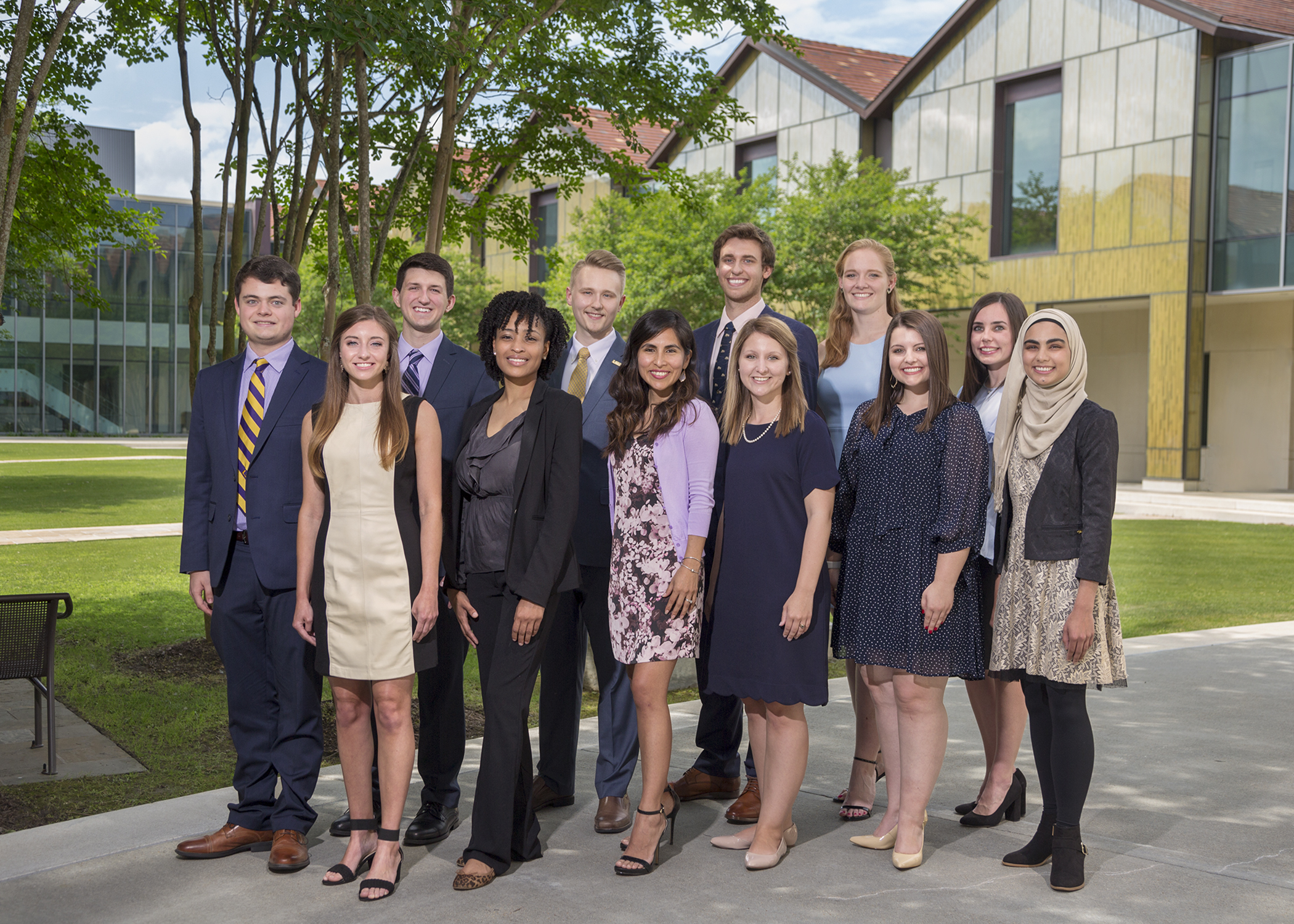 BATON ROUGE – The LSU Office of the Dean of Students presented the Tiger Twelve Class of 2018 at a ceremony held in late-April in the rotunda of the LSU Business Education Complex.

Tiger Twelve is an honor that has been presented to 12 seniors by the Office of the Dean of Students since 2003. Students selected as members of the Tiger Twelve are current, full-time students, who have maintained at least a 2.5 GPA and best exemplified the seven tenets outlined in the LSU Commitment to Community, a statement of LSU’s basic principles as an academic community. It was crafted by a committee of students, faculty, and staff in 1995 and states the expectations for each LSU community member.

The Tiger Twelve Class of 2018 includes:

Anton worked as a student employee at both the LSU Press and University Recreation during his college career. He served as the secretary of the Linguistics Club his sophomore year, tutored English at McKinley High School on behalf of the Ogden Honors College, and volunteered with LSU Service Breaks, the University Methodist Church and Volunteer LSU. He also interned in Kampala, Uganda, last summer where he raised funds for SPOUTS of Water, an organization that produces ceramic water filters.

Upon graduation, Anton will continue his work for a year in Baton Rouge with both the Louisiana Art & Science Museum and Gulf South Research Corporation doing archaeological surveying and fieldwork.  He plans to get his master’s degree in archaeology after gaining field experience.

Bernaola was a very active graduate student who served as vice president and president of the Entomology Club. She mentored new students who participated in the LSU BIOS program for six years, served as a science judge for three years at the Louisiana STEM Expo, and volunteered at the Waddill Wildlife Refuge and Audubon Butterfly Garden and Insectarium by giving tours and talks about insects and butterflies. She also served as a graduate research assistant for two years by educating farmers, county agents, and extension personnel on how invasive insects affect plants and the environment.

After graduation, Bernaola will finish her research at LSU. She is currently exploring her options in academia, industry and extension as an entomologist. She hopes to apply her research to real-world problems in agriculture.

Broussard served as an independent tutor of French, math and psychology all four years of her undergraduate career. She was a member and worship leader of Sigma Phi Lambda sorority and worked as a research assistant studying the effects of hatha yoga on smoking cessation in LSU’s Anxiety and Addictive Behaviors Lab. She also volunteered in a variety of campus and community organizations such as Encounter, Friday Night Out, Geaux Big Baton Rouge and Live 2 Serve.

Upon graduation, Broussard will be attending Spalding University in Louisville, Ky., this fall, to pursue her doctorate in clinical psychology with a hybrid focus in adult and child and family studies. She plans on working with marginalized and underserved populations throughout her professional career.

Callais was a four-year member of the LSU Ambassadors who served as an orientation leader for multiple years, became the orientation team leader in 2015, spring invitational chair and orientation executive chair in 2016 where she also presented information at the Southern Regional Orientation Workshop. She served as an undergraduate resident assistant for two years and president of Higher Education Student & Professional Association, or HESPA.

Casnave tutored at-risk high school students with the Louisiana State Youth Opportunities Unlimited, or LSYOU, program. She volunteered at the McMain’s Children Developmental Center, the LSU Food Pantry and served as the special events director for Kitchens on the Geaux. Casnave worked as a rehab tech under physical and occupational therapists at the Baton Rouge General and assisted with research in the lab of LSU Professor Nikita Kuznetsov, where they worked on developing recovery methods for stroke patients.

Casnave plans to attend physical therapy school in the fall of 2019.

Champagne was a four-year saxophone player for the Golden Band from Tigerland. He served as member at large for the Coast & Environment College Council and was a founding member of the Coastal Environmental Advocates Club. He volunteered with the Ogden Honors College and served as team captain for the Louisiana Service and Leader Scholars program coordinating activities with the senior citizens at Oak Park Plaza apartment complex. He also conducted coastal restoration research with both the Water Institute of the Gulf and the Undergraduate Research Opportunity Program within Louisiana Sea Grant.

After graduation, Champagne will work with the Louisiana Department of Wildlife and Fisheries in the Rockefeller Refuge. He plans to continue his education and eventually work with communities along the Louisiana coast.

Denham was a four-year member of both the YMCA Louisiana Youth and Government alumni program and the American Institute of Chemical Engineers, or AIChE. He was the founding president of the National Alliance on Mental Illness, or NAMI. His volunteer efforts include traveling to Panama with the Global Brigades to set up medical and dental clinics and working at the medical surgical unit at Ochsner hospitals in Baton Rouge and New Orleans. He also conducted research on primate phylogeny with the Presidential Future Leaders in Research program.

Denham plans to attend the University of Cambridge to pursue a master’s degree in health, medicine and society to explore the ways in which the structural design of healthcare markets and medical institutions affects public perception of health and medicine. After completion of the program, he plans to attend medical school at the Columbia University Vagelos College of Physicians and Surgeons.

Hasan dedicated a lot of her time during college to service organizations. She was a welcome leader in the Ogden Honors College; led the Baton Rouge Restoration and Beautification Committee of Volunteer LSU; served as the marketing director for Geaux Big Baton Rouge; was the leadership chair for Community Bound 2017; and served as the public relations coordinator for the National Alliance on Mental Illness, or NAMI. She also volunteered in the labor and delivery and surgery departments with Women’s Hospital for three years and conducted research for her undergraduate thesis in the microbiology lab at LSU.

Upon graduation, Hasan will attend the LSU Health Sciences Center in New Orleans to pursue an M.D.

Hopper was very active in the LSU Greek community. She served as president of the Panhellenic Council, was the Greek Board of Directors panhellenic liaison, and served as president of the national honor society for Greek students, Order of Omega. She was appointed to the LSU President’s Task Force on Greek Life, served as a member of the Greek Fee Advisory Board and the University Student Leadership Cabinet, and was a member of the Leadership LSU Class of 2018.

Hopper plans to attend medical school and become a surgeon. She also plans to publish her undergraduate research on handwriting.

Manno was a student employee in the LSU Department of Finance for three years. She served as a mentor with the Tiger Transition Team, was a Community Bound team leader with Volunteer LSU, and served as the treasurer of Gamma Beta Phi honor society. She participated in the Distinguished Communicator Program, was a member of the University Student Leadership Cabinet and was one of eleven undergraduate students selected to manage LSU’s $2.5M Tiger Fund.

Manno will join ExxonMobil full-time, pursuant to sitting for the CPA exam, in the fall of 2018.

McMorris worked as a student employee in the SDEIS Highway Safety Research Group, or HSRG, participated in the E. J. Ourso College of Business’ Center for Internal Auditing Program, and served on the University Student Leadership Cabinet. McMorris was a four-year member of the Student Activities Board who served as the Late Night chair in 2016 and president in 2017. He also served as the webmaster for Delta Sigma Pi business fraternity.

After graduation, McMorris plans to move to Houston, Texas, and work full-time with Ernst & Young as a member of the Risk Advisory Staff.

Riviere was a student employee in the LSU Center for Community Engagement, Learning, and Leadership, or CCELL, and was a team leader for the 2016 LSU Service Break trip to Ghana. She served as the events coordinator for Planned Parenthood Generation Action at LSU, vice president of public relations for the Rowing Club and president of the Women’s Rugby Club. As a senior, she interned with Cheerful Hearts Foundation in Ghana as a development officer and project coordinator on the Child Labour and Trafficking Project.

Following graduation, Riviere will continue her internship with PFM Management and Budget Consulting in New Orleans. In September, pursuing her passion for sustainable community development, she will begin a master's program in international development at Northumbria University in Newcastle, England, where she will also play for the Women’s Rugby team.