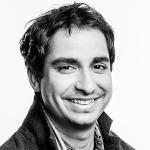 BATON ROUGE – Evolutionary biologist and natural historian Prosanta Chakrabarty has been selected as a TED 2018 Senior Fellow, joining a class of change-makers from around the world. He was selected for his extraordinary work and contributions as a TED 2016 Fellow.

“The TED network is a powerful tool for the advancement of ideas. It is the most exciting, diverse and creative environment I’ve ever seen. It’s an honor to have this opportunity to promote science on the international stage as a TED Senior Fellow,” Chakrabarty said.

As the Curator of Fishes at the LSU Museum of Natural Science, Chakrabarty’s research focuses on the evolution of both marine and freshwater fishes including cavefishes, bioluminescent species and lineages that help explain ancient geological events. He and his students conduct fieldwork around the world including Central America, Southeast Asia, the Middle East and Louisiana.

“We are proud that our 2018 fellows comprise a truly global, cross-disciplinary group of individuals, each of whom has already had extraordinary impact in their fields,” said TED Fellows Deputy Director Shoham Arad.

Chakrabarty received his doctorate from the University of Michigan, Ann Arbor. He was a postdoctoral fellow at the American Museum of Natural History in New York, and he joined the LSU faculty in 2008. He is an associate professor in the LSU Department of Biological Sciences.

About the TED Fellows program

The TED Fellows program brings together young innovators from around the world and across disciplines, who display both outstanding achievement and exemplary character, to raise international awareness of their work and maximize their impact. The program offers fellows full participation in a TED or TED Global Conference, a two-day pre-conference of workshops and activities, a Fellows Retreat, ongoing professional coaching and mentoring, dedicated PR coaching and active participation in the TED community, including the global TED Fellows network. Founded in 2009, the TED Fellows program now includes 453 fellows from 96 countries, and was named one of the top 10 Fellowships of 2016 and 2017 by ProFellow.com.