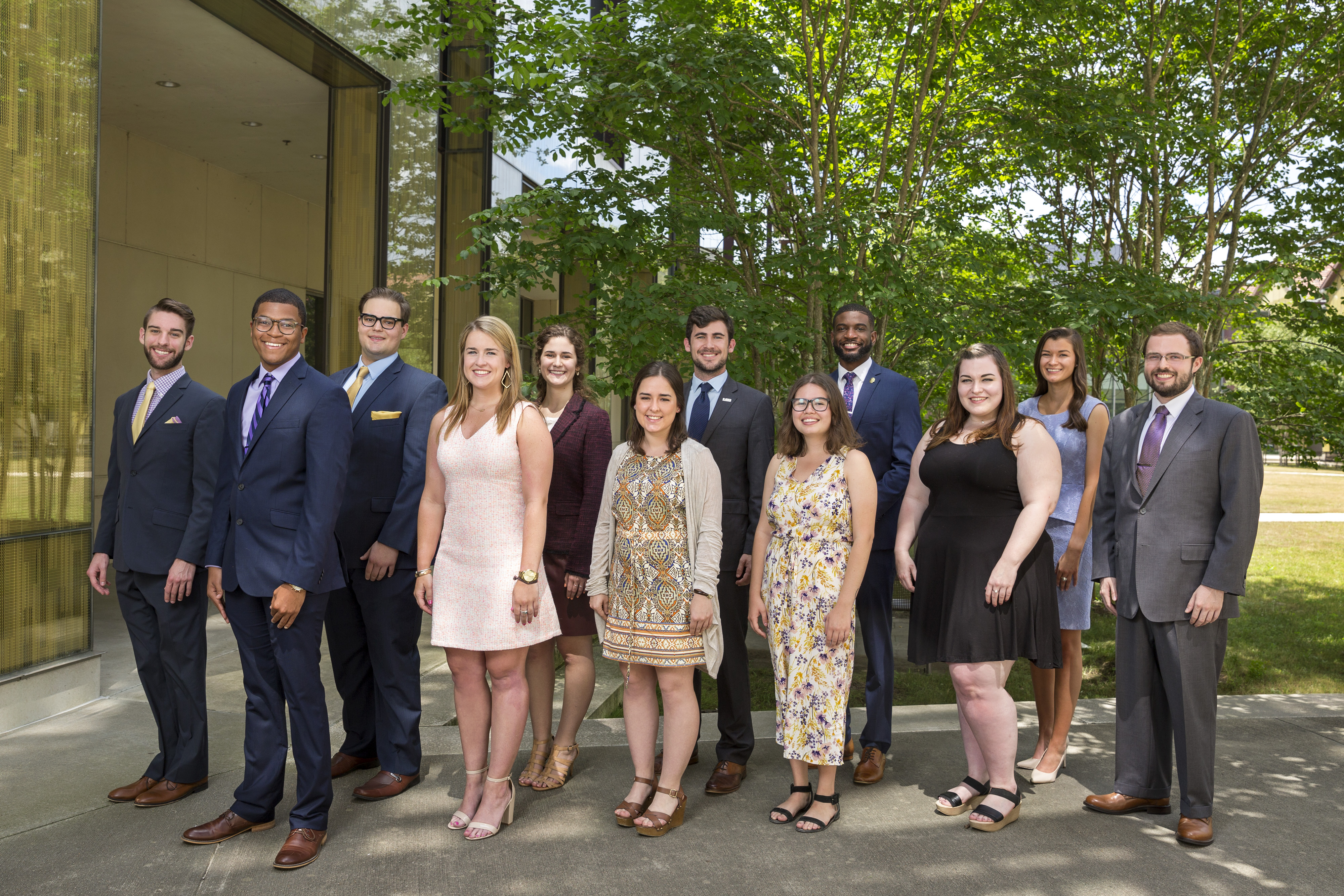 04/24/2017
BATON ROUGE – The LSU Office of the Dean of Students presented the Tiger Twelve Class of 2017 at a ceremony held Saturday, April 22, at 2:30 p.m. in the rotunda of the LSU Business Education Complex.

The Tiger Twelve Class of 2017 includes:

August served as an LSU Ambassador spring orientation leader and LSU STRIPES Program small group leader, where he welcomed new students and families to LSU. He also represented LSU at the Southern Regional Orientation Workshop. August was selected LSU Mister Imani 2015, and worked to improve minority retention and inclusiveness on campus. He is the president of Alpha Phi Alpha Fraternity Inc., and was a member of the Leadership LSU Class of 2016. He worked as a public health intern for the U.S. Center for Disease Control and Prevention where he completed a qualitative health study of Washtenaw County, Michigan.

After graduation, August will be relocating to Dallas, Texas, where he will be working with a medical sales company, specializing in prosthetics and surgical equipment. He hopes to work towards decreasing the disparities that exist within impoverished communities by facilitating their access to affordable, quality healthcare.

Beste served as executive council president of the LSU Panhellenic Council, the governing body for LSU’s fourteen Panhellenic sororities, and was a vice president of operations for Kappa Delta Sorority. She was the lead facilitator for the EMPOWER Greek retreat and represented LSU at the Southeastern Panhellenic Conference in Atlanta, Ga. She was involved in the recolonization of Alpha Delta Pi at LSU. Beste was appointed to the LSU University Student Leadership Cabinet and was selected for the Leadership LSU Class of 2017. During her four years at LSU, Beste worked as a student assistant in the Office of Orientation and the Office of Family Programs.

Corie served as the programs director for Kitchens on the Geaux at LSU, an organization that aims to reduce hunger in the community and create awareness about hunger and food insecurity. Corie led the planning efforts for programs like the annual Potato Drop and Hunger and Homelessness Awareness Week. Corie was the vice president of Planned Parenthood Generation Action and participated in the Toni Morrison Society Bench by The Road Project that commemorates the 1953 bus boycott in Baton Rouge. During her time at LSU, Corie worked as a programs instructor at the Big Buddy Summer Academy and as a resident assistant in LSU campus housing.

Corie will be attending graduate school next fall to pursue her interests in public policy and food security.

Dizor was an active member of the LSU Residence Hall Association, where he served as vice president of the Laville Community Council, vice president of the organization and director of volunteers and philanthropy for the organization. Through RHA, Dizor became involved in the National Association of College and University Residence Halls, where he rose to the position of coordinating officer for presidential relations. Dizor served in the Phillippines with the LSU CHANGE Break program, volunteered four years at Geaux BIG Baton Rouge, and served as one of two lead student assistants for LSU Campus Life.

Dizor plans to spend the next year working in Higher Education Student Affairs to gain valuable skills before attending graduate school for Student Affairs. He intends to spend his professional life working with and developing college students.

Dominique was an LSU Ambassador who helps with a number of campus and community causes, the most important of which is helping new students and their families prepare for their time at LSU. She served as a chair of the Alpha Epsilon Delta Pre-professional Health Honor Society, served as a mentor in the Biology Intensive Orientation for Students program, and worked as a tutor for the LSU Cox Communications Academic Center for Student-Athletes. Dominique volunteered as an advanced call specialist for The PHONE Crisis Intervention Center in Baton Rouge, as a reading friend at Highland Elementary, and at service days like MLK Day of Service, Community Bound and Geaux BIG Baton Rouge.

Upon graduation, Dominique will attend the LSU Health Sciences Center in New Orleans to pursue a dual M.D./M.P.H.

Faircloth has served his senior year as LSU student body president. He mobilized quickly to lead a number of critical initiatives in that role, including a volunteer program/collection drive to assist those impacted by the August 2016 floods and a vigil honoring those in law enforcement following the ambush of officers in July 2016. As president of Student Government, he created the LSU Student Advocacy Commission and wrote the first Higher Education Score Card, work for which he was awarded the SEC Student Government Rise to the Challenge Award. Faircloth has also served as Phi Gamma Delta Fraternity president, where he increased the academic admission standards. He worked as a congressional intern for U.S. Rep. Garrett Graves.

Gonzalez was an active student and published researcher, working in the lab of LSU Professor Marybeth Lima, serving as a teaching assistant for BE 1252: Biology in Engineering, working a peer mentor to first-year students just getting started at LSU, and serving as vice president of the Biological Engineering Student Organization. He studied public health in Cuba, where his family resided before immigrating to the U.S. after the Cuban Revolution. He was a camp counselor at Arden Cahill Academy, where he was responsible for 20-30 second through fifth grade campers each day. During his four years at LSU, he worked as a research and design team member and build manager for the LSU Community Playground Project, which aims to provide a safe playground to every public school student in Baton Rouge.

Gonzalez will pursue an M.D. in Louisiana beginning this fall.

Kruger was an active chemistry researcher and LSU Discover scholar investigating cost-effective, impactful treatments for HIV-associated Kaposi’s Sarcoma through a partnership with the LSU Ogden Honors College, Department of Chemistry, Department of Biological Engineering, and the LSU Health Sciences Center in New Orleans. He participated in a number of construction, planting and mentoring volunteer projects through the Louisiana Service and Leadership Scholars program in the Ogden Honors College. Kruger served as treasurer and financial chair of the Student Affiliates of the American Chemical Society, president and LSU representative to the national conference of Phi Sigma Pi National Honor Fraternity, volunteer for a number of Alpha Epsilon Delta Pre-professional Health Honor Society projects, and studied abroad in Germany.

Kruger will be attending The Dartmouth Institute for Health Policy & Clinical Practice with the Geisel School of Medicine, earning his Master in Public Health before attending medical school to combat infectious diseases in clinics globally.

Primeaux was an involved LSU Ogden Honors College Advocate, who recruited and supported students at LSU. She was an active volunteer participating in Community Bound, Geaux BIG Baton Rouge, various Volunteer LSU projects and community gardening with students at University Terrace through Kids Hope. Primeaux tutored fellow students in French and Spanish at the LSU Center for Academic Success. Primeaux worked as a development intern for the LSU Museum of Art where she was able to bring education programs to local schools without arts programming and community art programs to underprivileged parts of the city. She has volunteered at local schools to tutor and translate for dozens of unaccompanied minors who fled Central American countries.

Primeaux will be teaching English to students in Paris, France, for the first year after graduation.

Richard served as education chair and financial chair for Global Brigades Medical/Dental Chapter to bring medications and healthcare to Central American nations. He served as senior advisor to the student body president and assistant director of philanthropy for LSU Student Government. He was president and initiation chairman for Phi Alpha Delta Fraternity; charted a new student organization, iGet Active, which hosts a free week-long summer camp; volunteered and managed logisitics for Geaux BIG Baton Rouge; and served as an LSU Ambassador. Richard served four summers as a counselor at the Louisiana Lions Camp for children with disabilities.

Richard will be teaching middle school mathematics in partnership with Teach for America. Upon completion of his two-year commitment, Richard will pursue an Ed.D. in educational leadership at Southern Methodist University.

Scaglia Drusini was an associate member-at-large and vice president of service of Alpha Epsilon Delta Pre-professional Health Honor Society, where she volunteered as a reading friend for Highland Elementary School students, served at the Youth Oasis emergency youth homelessness shelter in Baton Rouge, and assisted in the organization’s flood relief efforts. She was an LSU Roger Hadfield Ogden Honors College Advocate, where she provided tours of Honors facilities, welcome programs, and orientation events for future LSU Tigers. She served as the director of Spanish communications and medical coordinator for Global Brigades Medical/Dental Chapter in Central America and was named a 2016-17 Tom W. Dutton Scholarship recipient for service to her community. Scaglia Drusini also served on the executive board of St. Jude Up ‘til Dawn, a philanthropy supporting St. Jude Children’s Research Hospital.

Scaglia Drusini is hoping to begin medical school in pursuit of her medical degree in fall 2018.

Williams has served as Council Sisterhood Committee director and vice president of administration and accountability as a member of Delta Zeta Sorority and as vice president for administration and homecoming director of the Greek Board of Directors. She has been an active member of The Refuge campus ministry for three years, serving as a community group leader each week. Williams served with The Refuge in flood clean-up efforts around the Geater Baton Rouge area. She has participated in mission trips to Haiti and Puerto Rico.

Williams plans to pursue a J.D. and serve as a family lawyer to those who are oppressed and underprivileged.

Tiger Twelve is an honor that has been presented to 12 seniors by the Office of the Dean of Students since 2003. Students selected as members of the Tiger Twelve are current, full-time students graduating in 2017, who have maintained at least a 2.5 GPA and best exemplified the seven tenets outlined in the LSU Commitment to Community, a statement of LSU’s basic principles as an academic community. It was crafted by a committee of students, faculty and staff in 1995 and states the expectations for each LSU community member.