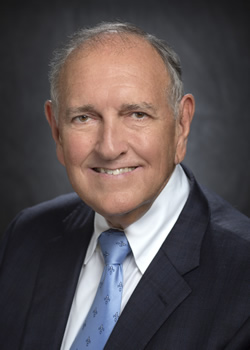 A fourth generation builder, B. Wayne Brown founded and led Brown Builders, Inc. for over forty years.  Under his leadership, the company introduced to Shreveport/Bossier City and the state of Louisiana innovative methods of design, construction and contracting that helped shape our communities with landmark facilities where we work, play, learn, live, create, shop, serve, protect, and worship. Brown Builders’ portfolio includes a wide range of sizes and scopes for public, private and government owners.  Wayne also partnered with his father and brother to develop over 2500 single-family home lots in several complete neighborhoods that redefined the landscape of South Bossier City. For the past ten years, while continuing to guide Brown Builders as the Chairman of its Board of Directors, Wayne has focused his efforts on development of luxury multifamily apartment complexes in Louisiana and three other states.

A Registered Professional Engineer, Wayne received his Bachelor of Science in Civil Engineering from LSU and his Master of Science from Purdue University in Civil Engineering specializing in Construction Management.  Following graduate school, he pursued his professional career as onsite project engineer in San Francisco and in Santa Ana, California, before returning home to Louisiana to join his father and brother to start Brown Builders.

Wayne is a past president of the Shreveport Chapter of the Associated General Contractors, a member of the Louisiana Engineering Society, the American Society of Civil Engineers (life member), National Society of Professional Engineers, National Associated General Contractors, and previously served on the Advisory Council for Butler Manufacturing, the international steel building division of Australian BlueScope.

Throughout his career, Wayne has lived out his belief that a strong economy, vibrant civic organizations, competitive and easily accessible educational opportunities and business involvement in local and state government are vital to the success of our state and our community. Wayne has served on the Shreveport Chamber of Commerce Economic Development Board, Bossier Chamber of Commerce Board, Greater Bossier Economic Development Foundation Board (past chairman), and the North Louisiana Economic Partnership Board. He is a member of the Shreveport/Bossier Committee of 100 and on the Executive Committee of the Committee of 100 Louisiana for Economic Development. He served on Governor John Bel Edwards’ transition team as a member of the business community.

Wayne has been honored numerous times for his business and civic contributions.  In 2017 Junior Achievement inducted him into the North Louisiana Business Hall of Fame. Southern University named Wayne a 2014 Southern Gentleman. He was named Bossier Chamber of Commerce Small Businessman of the Year, one of the Top Ten Small Business People of the Shreveport Chamber of Commerce, and finalist for Louisiana Entrepreneur of the Year. Brown Builders was awarded the Butler/BlueScope North American Volume Builder of the Year in 2014.

Wayne is an active supporter of numerous non-profits including Volunteers of America, the Glen Retirement System, Providence House, Highland Center Ministries, Community Foundation of North Louisiana, and the Boys and Girls Club of America. He is an active member of The First Baptist Church of Shreveport where he has held many offices including Deacon Chairman.

Wayne and his wife Ellen have four daughters, three sons-in-law and thirteen grandchildren with strong ties to LSU. Wayne and Ellen are both proud LSU graduates and three of their daughters hold LSU degrees; a Juris Doctorate, a Bachelor of Arts in Journalism, a Doctor of Philosophy in Social Work, and an M. S. in Public Administration. Additionally, Ellen taught at LSUS several years as an Adjunct.