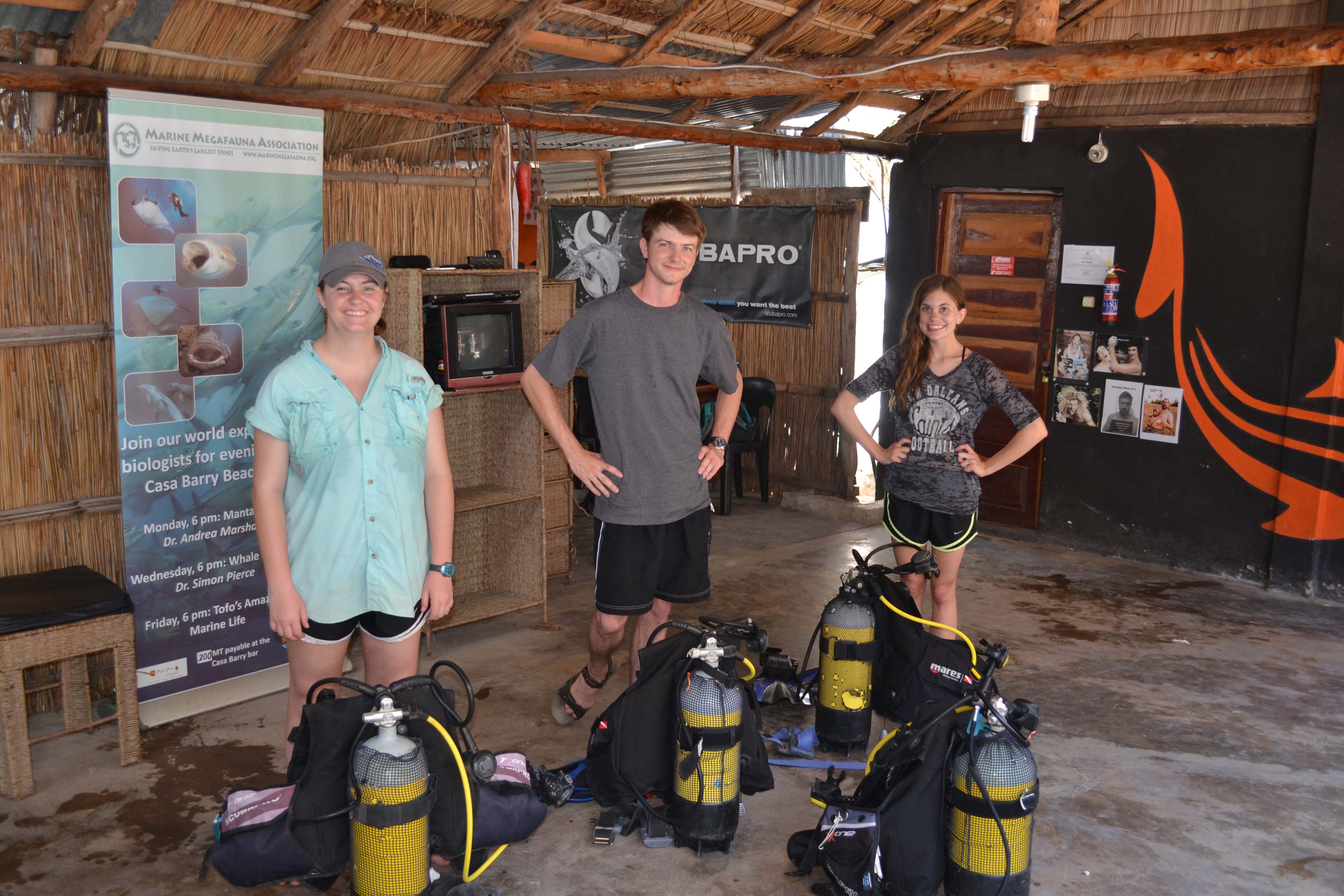 LSU College of Agriculture students Brandy Malbrough, Tanner Jones and Jamie Amato received dive certification while in Tofo, Mozambique so they could look at fish populations in the area and take water samples at different depths to analyze the phytoplankton and other aspects of the water.

Three students in the LSU College of Agriculture accompanied Reagan Errera, an instructor in the college's School of Renewable Natural Resources, on a research mission to the coast of Mozambique.

The students, Jamie Amato of Kenner, Tanner Jones of Tyler, Texas, and Brandy Malbrough, of Houma, were in and around Tofo, Mozambique, from March 17-26 helping Errera set up a project to study the connection between phytoplankton and whale shark abundance in the area.

The organization All Out Africa was looking to better understand whale sharks and turned to Errera for help.

“Tofo has a high abundance of charismatic megafauna, such as whale sharks and giant manta rays, but we are lacking an understanding of the underlying dynamic – what brings them to the area, what is sustaining them,” Errera said. More importantly, she noted, they are looking for a reason why fewer whale sharks have been coming to the Tofo area during the past decade.

Tofo developed around tourism based on whale sharks and other marine life. The students went out on ocean safaris with tourists, and part of their research was surveying the tourists.

“While on the ocean safaris, anytime we saw anything we took approximate GPS coordinates, size, how many, noted behavior,” Amato said. This information will assist in research efforts identifying areas frequented by specific species.

While there, the students also received certification to dive. “Before we could dive we had to take a test to be able to identify 60 different reef fish,” Malbrough said.

The group also collected water samples at different depths to analyze the phytoplankton and other aspects of the water.

Based on previous research studies conducted in the area, the team was aware that the water quality could be a factor in whale shark abundance.

“Research from the area has suggested that the waters could contain domoic acid, a neurotoxin formed by a phytoplankton. We are checking for its presence in the water column and whether it is leading to a decrease in whale shark populations,” Errera said.  They are also testing for carbon and nitrogen in the water to determine the quality of the food sources in the area.

Errera plans to go back next year with five to 10 students and stay for three weeks.

“Students will set up research projects, conduct diving surveys, analyze data, present it and receive class credit for it,” she said.

Amato, Jones and Malbrough all agreed the trip was an amazing adventure.

Jones, who had traveled out of the country before, said he still never experienced anything like it. “There was some culture shock initially, walking around the town market,” he said.

Malbrough said she enjoyed the simpler way of life. “It was great to disconnect. The mentality there was so different and their resources so vast.”

Watch a video the students created: